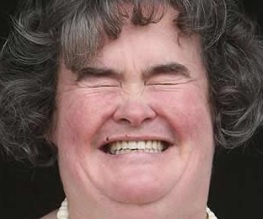 And with all that to choose from, they’re making a film about Susan Boyle. Susan Boyle! Come on Hollywood. Get a grip. That’s going to be like The Iron Lady only way more sad. What point are they going to end it at, do you think? When she tries to come onto to Louis Walsh? When she has that breakdown and there’s the photo of her with a scarf on her head? When she signs away the rights to the film of her life? So many possibilities, guys. Seriously though. A Susan Boyle film? We know there’s already a biopic of Paul Potts (NOT to be confused with this guy) in the making, but when is this Britain’s Got Talent nonsense going to stop? What’s next? A biopic of Pudsey, the performing dog? Is that what’s next in line? WHO’S GOING TO PLAY PUDSEY, GUYS? THE HORSE FROM WAR HORSE? SUSAN BOYLE? MILEY CYRUS?

Are we overreacting or does this madness HAVE to end?

Previous: The Avengers immortalise Agent Coulson in plastic
Next: Rose Byrne and Rafe Spall in first trailer for I Give It A Year