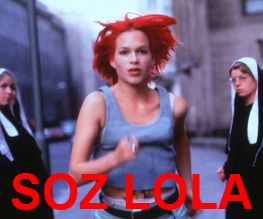 Four Swedish cinemas have begun to rate the films they show not only using the traditional ‘how many guns/swears/tits are there’ system, but also with the anti-sexist Bechdel Test.

Just in case you’re an awful plum who doesn’t care about these things, the Bechdel Test is a simple metric designed to assess the presence of female characters and the extent to which they’re fleshed out in a film. It goes like this:

1) Are there are least two named female characters?
2) Do they talk to each other?
3) About something that isn’t a man?

Elegant, isn’t it? The move to double-rate films is currently being spearheaded by a few arthouse cinemas, although support from the Swedish Film Institute suggests it may become more widespread. An ‘A’ rating is awarded to films that, unlike (to take a few examples from this year’s releases) Captain Phillips, The Fifth Estate, Ender’s Game, Filth, Gravity, The Great Gatsby, Mud, Pacific Rim, Pain & Gain and Trance, pass the test. It’s not clear whether other films are due to be graded in terms of the severity of their failure; the website bechdeltest.com has four ratings from ‘passes’ to ‘literally doesn’t even have two female characters’, which seems like a reasonable strategy.

Criticisms of the Bechdel Test include the contention that it can give an artificial ‘feminist-friendly’ stamp to films that are nothing of the sort, whilst sidelining genuinely pro-feminist films. Our favourite example? All five Twilight films, which are about how women should sublimate their own desires and needs in order to mould themselves into what their husbands want (and don’t even THINK about not having a husband), pass the Bechdel Test. The completely brilliant Run Lola Run, in which the title character kicks ass and takes names from start to finish (although, admittedly, it’s to help her boyfriend), doesn’t. Someone’s also bound to go mad about the Swedish state trying to dictate the contents of movies, which is sort of fair enough but also rubbish (yes to artistic freedom, but also yes to girls having role models, you feel me?).

One fun consequence of the ratings farrago is that Viasat Film, a cable channel broadcasting across Scandiwegia, has scheduled a Super Sunday of Bechdel Test-passing films for next weekend. They’re showing Resident Evil: Retribution (awful start), Moneyball (chicks love baseball too), Zambezia (Madagascar meets Ga’Hoole), The Five-Year Engagement (edgy, not v funny), Monte Carlo (let’s not go there), Bitchkram (what even), Whip it! (bastard rollerskates), The Iron Lady (feminist or maniac?), The Hunger Games (Rue doesn’t really count, she’s tiny) and Savages (meh). Maybe we’re better off with the original Star Wars trilogy, which contains a grand total of three named female characters who are never on the same planet together.

What do you think of this – useful consciousness-raising tool, or pinko gimmick? Let us know below!