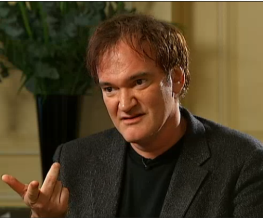 If there’s one thing you should never do, it’s ask Tarantino about the implications of violence in his movies. Unfortunately for news presenter Krishnan Guru-Murthy, he did just that on last night’s Channel 4 News. After the Django Unchained director had revealed that he felt glad that issues such as slavery had been brought back out into light again because of Django, Guru-Murthy then probed Tarantino about the controversy that surrounds his films: “Why are you so sure that there’s no link between enjoying movie violence and enjoying real violence?”

Tarantino searches for an answer for a couple of seconds, then decides against it. “Don’t ask me a question like that. I’m not biting. I refuse your question.”

Well, he certainly isn’t. After defending his questions extremely calmly and diplomatically, Guru-Murthy attempts to dress up the question by bringing in Jamie Foxx, who plays the captured slave freed by Christoph Waltz‘s character. Django then goes on a violent revengeful rampage to find his wife.

Tarantino backfires again. “This is a commercial for my movie, make no mistake… the reason I don’t want to talk about it is because I’ve said everything I have to say about it. If anyone cares… they can google me and they can look for 20 years about what I have to say. But I haven’t changed my opinion one iota.”

He then shuts Guru-Murthy’s butt down and accuses the interviewer for asking him questions that are already “on the record” simply for the ratings of the show. Eventually the tension dissipates, Guru-Murthy gets out alive and everybody can breath again.

The crazy-ass director has always been known to be a little feisty, but it seems like he now has a hard time extricating politeness, manners or maintaining any sort of Cool. Understandably Tarantino probably gets asked the same questions over and over again, but does he not invite and expect us to ask them? This’ll certainly raise even more publicity for his new film and his nutty reputation as it already stands, but has Tarantino finally gone a step too far, rudely dismissing a widely-respected presenter?

Conceited or just frustrated? Let us know what you think below.

Previous: Christopher Nolan will rewrite script for Interstellar
Next: Hugh Jackman in new image from The Wolverine