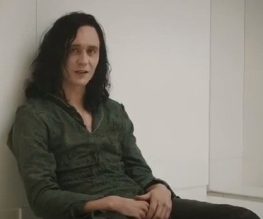 The Avengers 2 will be missing one greasy-haired smiley mo-fo by the name of Loki, if recent words from writer/director Joss Whedon are anything to go by (hint: they are). Speaking on the Empire podcast to promote his iteration of Much Ado About Nothing that he shot in his house in 12 days after The Avengers Assemble wrapped up, God Of The Geeks Joss Whedon revealed that Tom Hiddleston would not make an appearance.

Set to make his slimy return in Thor: The Dark World this autumn, Tom Hiddleston as Thor has been a fan favourite. We can only hope that nothing in the events of Thor: The Dark World will make him UNABLE to return, if you catch our drift, because we very much like our arch-nemesis Loki. Son of the snow giants/frost trolls/cold gremlins (whatever the hell his origin story was), Loki has always been the Marvel character we identified most with, seeing as he spends most of his time on-screen getting his ass repeatedly handed to him.

The casting and possible plot points in The Avengers 2 has had much debate over the last few months. We at Best For Film even did our own investigation into the post-credits sequence of The Avengers Assemble, and there have been on-going rumours of which actor is in talks and which isn’t. Recently there were feverous and unsubstantiated talk of Jeremy Renner jumping ship as Hawkeye, but as of yet that story remains grade-Z baloney.

It must be hard for poor Joss Whedon – he’s been doing the rounds promoting his fantastic adaptation of Much Ado About Nothing and all people can ask him is how the writing for The Avengers 2 is going. We certainly would do the same given half a chance.

We loves ya Jossy boy. Keep representin’ for us Brown Coats and Buffy fans.

No Loki for The Avengers 2!? Could it mean him shuffling off his immortal coil, or does Joss Whedon just not want him to detract from Thanos?

Previous: The Wolf Of Wall Street first trailer – it’s mental
Next: Best For Film is having a party