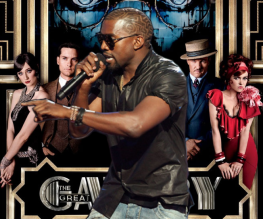 The Great Gatsby is almost upon us, and has delivered a slew of TV spots and trailers, the most bizarre of which is the trailer below, which features Kanye West‘s No Church In The Wild. However much you like Kanye (and we do, in a guilty sort of way), his auto-tuned riffs and whispered rhetorical questions about “non-believers” clash horribly with Leonardo DiCaprio‘s stupid smug expression (IN GLORIOUS 3D!).

In the trailer we see The Great Gatsby under all of the lights of the 1920s, and he certainly isn’t going to drive slow with all that liquor around. It won’t be long until everything he has all falls down. You may have heard ’em say “Gatsby Gatsby Gatsby” repeatedly in the trailer, that’s because he’s kinda like a big deal. Tobey Maguire seems so appalled at Leo’s swagger, but most people can only gaze on as if Jesus walks once more. As creepy and womanising as The Great Gatsby appears, it won’t be long before his love interest gives him a cold welcome to heartbreak, perhaps because she’s a gold digger. Maybe we’re just being paranoid.

Seeing as the Kanye West music ends a third of the way through The Great Gatsby trailer, we’ll cease this horrible excuse to make puns and go get lost in the world. We really are heartless, aren’t we?

Seriously though, this is an awful trailer. It says nothing about the movie, but this experience has already left us suspicious of the final product.

You would have to be STRONGER than us to appreciate this trailer for The Great Gatsby. Looking forward to it?

Previous: The Crow flies once more with boyo Luke Evans
Next: The Wolverine gets new poster: Silver Samurai intimidates