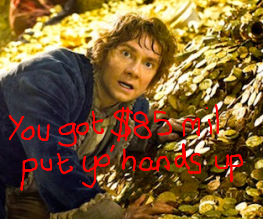 The Hobbit: An Unexpected Journey is finally out in cinemas, if you hadn’t realised, and despite it getting a mixed reception from critics it has still managed to garner a fortune to rival that of Smaug. Well, perhaps not that much – Forbes has estimated that Smaug is worth $62 billion, proving in one fell swoop both that The Hobbit has unquestionable cultural influence and that the editors of Forbes have too much time.

The Hobbit appears to have been disliked by a great deal of professional critics. It’s only on 58% on Metacritic, and 65% on Rotten Tomatoes, meaning that it is barely ‘Fresh’. This is at odds with the user scores on both sites, at 81% and 85% respectively. Quite why there is a disparity between the critic and user scores of The Hobbit is made painfully clear by a cursory glance of the reviews: most critics saw the high frame rate version of The Hobbit and, pretty unanimously, they hated it – and justifiably so. The extra clarity, as technologically impressive as it is, only serves to jar against our pre-conceived notions of what cinema should look like. Howeever, many critics have gone on to give The Hobbit a low score based not on the film’s quality, but on its technical presentation. Which is just silly, considering that the public has the option to see The Hobbit in the usual frame rate if they wish.

Another possible explanation for the critical backlash against The Hobbit is an unavoidable comparison to The Lord Of The Rings Trilogy, which is a set of films more aimed at adults than The Hobbit. There is also the effect that media-blitzing has on expectation. It is a truth universally acknowledged that the more you have been exposed to promotional material before a film is released, the more likely you are to be disappointed in the final result.

Of course, there remains the possibility that these critics genuinely dislike The Hobbit, in which case, more power to them. Still, they’re completely WRONG THE HOBBIT IS AWESOME, THERE’S CGI HEDGEHOGS FOR FUCK SAKE!

Have you seen The Hobbit: An Unexpected Journey yet? What did you think of it?

Previous: 12 Days of Christmas #5 – BFF’s Top 5 Gold Rings
Next: I Give it a Year has a promising new trailer