The Hobbit looks set to become a trilogy 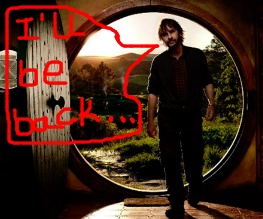 We excitedly told you all a few weeks ago that filming had finally wrapped on The Hobbit. Now Peter Jackson has gone and shown us all up by announcing that we are more than likely going to have a THIRD Hobbit film with the cameras beginning to clunk around in the distant future.

According to Jackson, there is a wealth of great material in the book’s appendices that they have not been able to include. Hang on just a cotton picking minute, Jackson. I believe you have already made THREE films about what happens after the end of The Hobbit already, or have you already forgotten all about them? And besides what would this one be called! There and Back and Back AGAIN? We are counting down the days till The Hobbit: An Unexpected Journey comes out, but at least let us settle into watching two films before jumping in with both feet on another one.

The new Hobbit films are said to be drawing on a lot from the appendices already with Jackson saying they have adapted “great chunks of his (Tolkein’s) appendices and woven it all together. The movie explains where Gandalf goes; the book never does. We’ve explained it using Tolkien’s own notes.” How much explaining do we need in life? We always thought that Gandalf went off and lived in a gay beach community somewhere playing boules everyday, but maybe we are wrong.

Nothing is set in stone yet as the studio will have to try and get all of the cast back on board which may take some time as (fingers crossed) Martin Freeman will be busy FILMING SHERLOCK SERIES 3!!! (Ahem…)

The Hobbit: An Unexpected Journey comes out this December. God only knows about film number three.