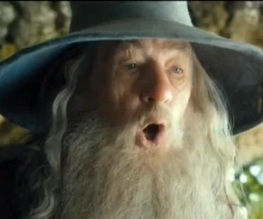 The Hobbit: An Unexpected Journey is a film which has been made and is going to be released on the 13th December. You may not know that, but here at Best For Film we like to keep up with all the news about films. Take The Hobbit for instance. That’s a film. It’s a prequel to the well-known series The Lord of the Rings and it’s largely about a hobbit.

The reason you may not have heard of The Hobbit is that there has been hardly any news about it. Like, no posters of a bunch of dwarves and one really handsome man, or trailers with all the singing or shit like that. NOTHING. It’s been a hobbit wasteland up in here. We’ve heard hardly anything. Until now that is! Look! A clip! Quick, catch it and watch it before it can escape. So magical. So Hobbit.

Wheeee! Look at Gandalf! He’s giving the hobbit a magic sword that glows blue whenever the demons arrive. That’s what just happened in that clip from The Hobbit. What did you think of it? It was alright. But in our view, there just aren’t enough hobbits in it. Having said that, there could be more hobbits in the second film, The Hobbit 2: Back In The Hobbit.

The Hobbit is out on the 13th December. THAT’S THE 13TH DECEMBER. Can you wait that long for all the Hobbity goodness?

Previous: Star Wars to be directed by Matthew Vaughn after all!?
Next: The Road: A Story of Life and Death