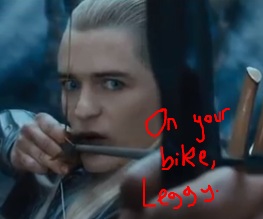 Just a day after we finally saw the first poster for The Hobbit: The Desolation of Smaug, the second part of a trilogy which definitely shouldn’t be happening, its principal trailer has landed. We’re not arguing that there shouldn’t be a film of The Hobbit, obviously – just that there should only be one. Because if you take a children’s novella and stretch it into six hours of cinema, ghastly boring arse-gravy like this happens:

Let’s have a look at Smaug, shall we? 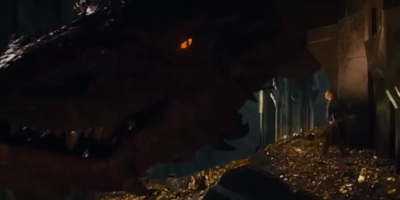 What on earth has happened, Weta? Do we need to call some sort of intervention group? We haven’t seen much of Smaug so far, it’s true, but what we have seen is barely worthy of an appearance in a Transformers sequel – that orange eye alone is enough to make us chuck away our numbered souvenir copies of Andúril and suddenly get really into Star Trek. Oh, and Legolas can piss off, him and his ginger-haired Elven bint. And Luke Evans, the poor man’s James McAvoy – the wig isn’t fooling anyone, Luke, you were still in Immortals and The Three Musketeers and we’ll never, ever, forgive you. We’re putting up with a lot from you here, Peter Jackson, and you’d better pull your bloody finger out.

What do you make of the new trailer for The Hobbit: The Desolation of Smaug? Let us know below!