The Hobbit to be shot at 48fps 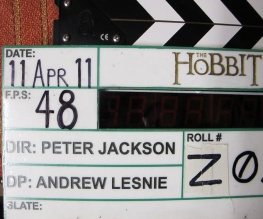 Peter Jackson has revealed that The Hobbit, which is currently in production, will be the first ever widely distributed feature to be shot at 48fps rather than the usual 24.

The use of the much higher frame rate, which will result in a smoother picture than traditional speeds allow, may placate fans who have complained about The Hobbit being shot in 3D.

Taking to his Facebook page to spread the word, Jackson commented that:

“[W]e have lived with 24 fps for 9 decades–not because it’s the best film speed (it’s not by any stretch), but because it was the cheapest speed to achieve basic acceptable results back in 1927 or whenever it was adopted… I see [shooting in 48fps] as a way of future-proofing THE HOBBIT. Take it from me–if we do release in 48 fps, those are the cinemas you should watch the movie in. It will look terrific!”

Jackson also shared a photo of himself by the 3D video set-up onset: We’re getting quite excited, despite ourselves. Roll on 2026, or whenever it’s coming out!

Previous: Could Duncan Jones take on Wolverine?
Next: Willem Dafoe in talks for Odd Thomas