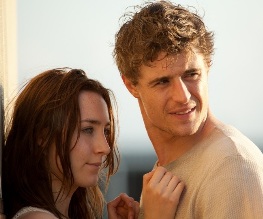 The thing about parasites is that they are nasty little buggers that refuse to go away. Did you know that there is a parasite called Ophiocordyceps unilateralis that gets into an ant’s brain, controls its thoughts and actions then shoots a stalk out of its head killing it? The Host is the equivalent version of that ant disease and by the end of the trailer for The Host you will be begging for a swift stalk to pierce your frontal lobe.

Now, we know we’re not the target audience for The Host and that the cinemas will be full of what can only be described as Jimmy Saville’s heaven, but as normal human beings of consenting age do we really have to be subjugated to The Host too? Apparently so. The trailer for The Host shoves love in your face faster than Elmo can and leaves you feeling just as emotionally scarred.

The Host has most definitely begun its onslaught on the human race. This trailer follows from yesterday’s brand new poster and undoubtedly we will have to watch a million more trailers before The Host gets released on the 29th March.

Do you really want to know the plot of The Host? If you answered yes then we suggest you hotfoot it for an MRI scan to check for ant-disease of the brain. Sadly, we feel obliged to tell you all about it anyway. The Host follows the life of Melanie Stryder, one of the last surviving rebel humans inhabiting Earth after a parasitic alien has taken over. The aliens take over a human host and eradicate all of their memories. The only problem is that emotions and love seem to weaken the parasite who have never encountered such feelings before. Cue Saoirse Ronan to battle the parasites with her “amazing personality” and show that them love is here to stay.

Groan. We’re going to go and have a lie down now.

Do you like Stephenie Meyer? Then please try to give us a valid reason below.