The Last Stand gets new trailer, sense of humour 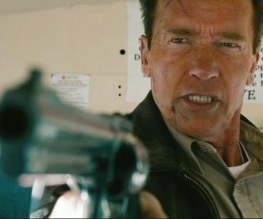 The Last Stand‘s initial appearance didn’t exactly fill us with hope for the second coming of Arnold Schwarzenegger. The former Governator’s return to our screens as a creaking, leather-bound old sheriff protecting a sleepy border town against a drug cartel inspired more eye-rolling than it did lip-licking. Our first look at The Last Stand was ninety seconds of meaty action set to a pathetic nu-metal chug. What a difference a trailer makes.

Now things look a little lighter, with the (still very meaty) action tempered by more of Johnny Knoxville and Luis Guzmán’s small-town horseplay. Arnold gets to deliver plenty of ‘too old for this shit’ grimacing, and if we’re being totally honest, it is kind of nice to have him back. At least, back in the kind of old school laugh n’ load action flick we don’t see much of any more.

The Last Stand is elemental in its story, which should leave room for a bit more detail surrounding Arnold’s tenure as a small-time officer of the law. Instead of firing him around the globe as a human cannonball, The Last Stand sets up a small town, puts Arnold in the centre of it and asks a trigger-happy drug cartel to try and get through. It’s Rio Bravo, it’s High Noon, it’s a trip to the museum and the star exhibit has finally been restored.

Too old for this shit? Don’t make us laugh. What do you think of The Last Stand? Comment below.

Previous: Tom Hardy competes to be David Yates’ Tarzan
Next: Machete Kills shows off Alexa Vega… all grow’d up, y’all