The Rock and Marky Mark in a guntastic Pain & Gain poster 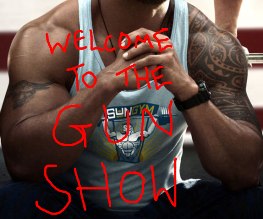 At this stage, we think it’s fair to say that our devotion to The Rock is a matter of public record. We love The Rock when he’s a tooth fairy, we love The Rock when he’s the Hulk, and we thought we were genuinely going to have a small trouser accident when The Rock announced that he was playing Hercules. The Rock lowering himself to portray a mere demigod should be treated with the sort of awe the Academy reserves for actors who convincingly ‘play disabled’, in our opinion. But Pain & Gain could be The Rock’s finest hour, because every hour is The Rock’s finest hour, because he’s The Rock.

Oh, and Mark Wahlberg’s in it too. Anyway, here’s a poster (click to enlarge, which you obviously must do because BICEPS): 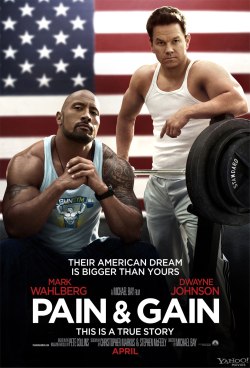 Michael Bay is breaking the habits of a lifetime by releasing an explosion-free poster, but even if you ignore The Rock’s transformative presence we’re still more enthusiastic about Pain & Gain than we’ve been about anything else he’s made in the last decade. Just in case you’ve not been keeping up, here’s the premise: The Rock, Marky Mark and Anthony Mackie (hang on, he’s not very hench) play Floridian bodybuilders who get mixed up in an extortion ring and then graduate to killing people. Ed Harris plays a detective on the trail of the incompetent musclebound criminals, and did we mention The Rock is in this film? Because he is – not only is he playing The Rock (The Rock has no time for character names), but we believe he may be playing Mark Wahlberg as well. Is that a hint of the People’s Eyebrow we spy on your awful face, Marky? 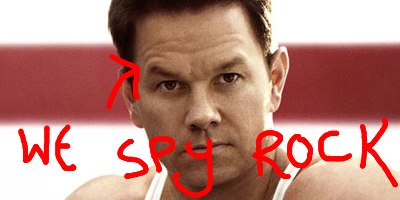 We think it is. Incidentally, whilst Pain & Gain is largely being billed as ‘a riotous action comedy starring The Rock’ the true story on which it was based didn’t have such a happy ending – the real life Daniel Lugo (The Rock) and Noel Doorbal (Anthony Mackie) are currently on Death Row because, amongst other things, they killed some people and then cut them up with a chainsaw and tried to burn the bits in an oil drum. Ahahaha…

Is this a slightly odd topic for a comedy? Who cares, The Rock’s in it!