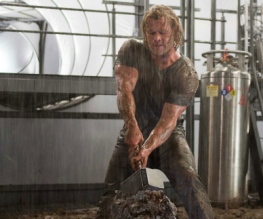 Marvel Studios is so convinced their upcoming superhero films Thor And Captain America will be monster hits that they’ve already ordered sequels.

“Thor will go off into a new adventure, and Captain America will continue to explore the modern world in another film of his own. We hope that holds true for the characters appearing in that film – Black Widow, Hawkeye, and the spy organization, S.H.I.E.L.D. – all of whom are more than worthy and capable of carrying their own films. And we’ve got a lot of other characters we’re prepping and getting ready for film debuts: the world of martial arts, these great cosmic space fantasies, Dr. Strange, and the magic side of the Marvel Universe. There are many, many stories to be mined.”

Here’s a thought: Fewer superhero films, better scripts? Just throwing it out there.