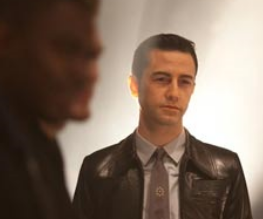 Things are picking up speed for time-travelling sci-fi thriller Looper. In the last few weeks we’ve gotten our hands on first stills, a teaser trailer and a first proper trailer, and now Emily bloody Blunt is getting in on the action. Doesn’t that girl have enough to be getting along with, being all married to the lovely John Krasiniski and all?

ANYWAY, our marital jealousies aside, new pictures for Looper! We’re never going to get tired of seeing Joseph GL do his bestest Bruce Willis impression. For those not in the know, Looper is set in a world where time travel has been invented; where criminals send people they want dead back to the past where a hit man will be waiting for them. But when one of their finest assassins – JGL – comes face to face with his future self, he has to make a decision: does he complete his hit and kill his future self, or betray the gang lords he works for? BRAIN SMASH ALERT. We’re guessing that last one is more of a ‘behind the scenes’ type, unless JGL’s character pauses mid blood-chase to make a short music video. Still, what a lovely tie he has!

Looper hits in September. Bring us the Willis shots!