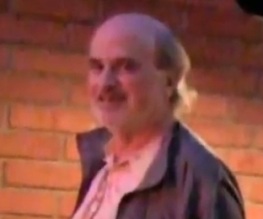 Gossip site TMZ made headlines across the world three years ago when it broke the news of Michael Jackson’s death, but film fans across the world have been left open-mouthed today after one of its ace reporters stumbled across an even more impressive scoop… without realising it.

An inane reporter of some sort ran up to actor Benicio Del Toro while he was strolling in Hollywood on Saturday night, but while asking him some damn fool question about Cuba entirely failed to notice who Del Toro was walking with. It was none other than reclusive director Terrence Malick, who had been photographed approximately twice in his whole career until he was caught on camera doing preliminary work for Lawless last autumn, repeatedly tried to get out of shot while Del Toro did his best to keep him in the frame (to the apparent bemusement of the idiotic cameraman).

Here’s the clip. It beggars belief:

And here’s what the soulless drones at TMZ have done with it after finding out what colossal fucking morons
they are:

That chap with the long hair ought to be taken out and burned.

Are you reading this, TMZ? Know that we despise you and all your works.

Previous: The Soul of Flies
Next: First synopsis for Neil Blomkamp’s Elysium