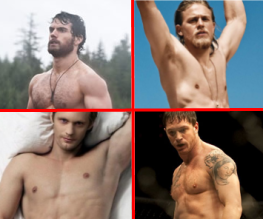 Tom Hardy, along with Henry Cavill, Charlie Hunnam and Alexander Skarsgård, are all currently in talks for the lead role in David Yates‘ next project: Tarzan. The thought of Tom Hardy in a loincloth jumping from tree to tree is the only thing about this film we are remotely interested in, so here’s to Tom Hardy beating out the (rather paltry) competition!

Tom Hardy was last seen canoodling with David Yates over the latter’s proposed project Cicero, a possible trilogy of films about the life and times of tubby tax evader Al Capone, played by Tom Hardy himself. Unfortunately, it’s dropped almost completely off the radar since it was announced. David Yates is principally known for the Harry Potter and the Deathly Hallows films.

Henry Cavill is currently set to play Superman in Man of Steel, which excites only Henry Cavill. Charlie Hunnam will be popping up in next year’s robotastophe Pacific Rim and Alexander Skarsgård is famous for not being Tom Hardy. Oh yes, he’s also doing that True Blood thing.

It looks as though Warner Brothers are trying to keep things in the family at the moment, as all four stars are associated with WB projects. Let’s hope Tom Hardy brings some of that Bane magic from The Dark Knight Rises to his audition for Tarzan. But please, Tom Hardy, leave the respirator at home.

Can David Yates create a gritty, more realistic Tarzan? No. No he can not. Good luck, David.

Who do you think would win in a fight between the four potential Tarzans? And remember, Tom Hardy beat up Christian Bale!

Previous: Orange(Wednesday)s and Lemons #91
Next: The Last Stand gets new trailer, sense of humour