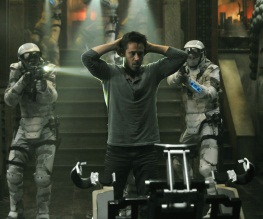 We admit it, we were so busy giggling at Michael Bay’s frantic attempts to make Teenage Mutant Hero Turtles a concept that can be explained by science (mad excited for his next project, Biker Mice) that we totally forgot that there was a remake of Total Recall in the pipeline. But now it’s proper Dufresne’d it out of the shit pipe and is almost into the swampy puddle, ready to raise its fists into the air and go ‘Wuuuuaaaarrrrgggghhhhhh!’ as its eyes bulge out of its head (how’s all this cross-referencing working for you?). We initially made a sad mewling noise, but then we saw Colin Farrell’s amiable Irish face, remembered how good Fright Night was, and settled down to watch 30 seconds of trailer trailer. Yes, apparently that’s how these things are going to be done from now on.

So yeah, speaking of Michael Bay..

Of the things directly lifted from the Transformers franchise, we counted the music, font, explosions and apathy, as well as the blue lights and dirty shirts of Iron Man and the literally-everything-else from the first hour of The Fifth Element.

Really, we should have seen this coming when we saw that Len Wiseman, who’s responsible for absolutely nothing good ever, was signed on to direct, but we did kind of hope that at least a little of Verhoeven’s satire and quirk might have survived. Quite why they’ve bothered with buying the rights when they could easily have just stolen the plot and repackaged it, something which has already happened six or seven times, is beyond us. Weirdly, they haven’t even done that; this version isn’t even set on Mars, with the setting involving Earth split into two warring continents. We swear to God, if they try and imply that this is a prequel to 1984, there’ll be hell to pay.

Sorry Columbia, but come Sunday we’ll be washing the everloving shit out of our hair.

Previous: New Pictures From Snow White And The Huntsman
Next: Lay Your Eyes On ‘The Monk’ Trailer