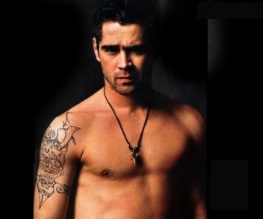 The day is April 2nd 2012. It is a day which will stand out throughout the history of humankind. Yes; today is the day that the Total Recall trailer FINALLY got released.

We’ve been waiting for this for what feels like forever. Teaser trailers, viral websites, HUGE FONT ON BLACK POSTERS, Colin Farrell looking worried… none of it could sate our appetites. The full version of the trailer has promised us MORE FOOTAGE and PLOT and stuff. So let’s take a gander, shall we?

Right. Yes. So the plot seems to revolve mainly around the idea of… guns. Lots and lots of guns. You can’t have a great sci-fi flick without a full arsenal of gorgeous bullet-spewing weapons, after all.

Well, as we already knew, Colin Farrell is Douglas Quaid, married to the beautiful Kate Beckinsale. He’s a factory worker with Big Dreams and he wants to bust his way out from the labouring masses of New Shanghai and make something of himself… it sounds a little like Antz, doesn’t it?

Anyway, he hears about Rekall, a company that promises to load your memory up with your wildest fantasies, and decides that this is just the ticket for him. Except, you know, the secret agent package he’s selected has barely started uploading before alarms start sounding all over the place. You can tell how bad things are from the horrified expression on the Rekall downloading man’s face. LOOK HOW HORRIFIED HE IS! Armed police storm the room, Quaid undergoes a suddent transformation and he absolutely blasts the hell outta them all. Cue brief glimpses of Bryan Cranston, Bill Nighy and Jessica Biel, all of whom seem to share a deeply troubled past with Quaid. Factory worker, ha! This guy’s a bona fide secret agent, busily working with the resistance movement he’d forgotten existed… or is he?

As the trailer states: “What is real… What is rekall”

Note the lack of question marks. These aren’t queries for you to go away and debate. They are STATEMENTS of FACT. ‘What’ must represent something… we’re just not sure (ahem) what. “BLANK is real. BLANK is rekall.” BUT WHAT IS BLANK?!?!?

Total Recall will be out on August 22. Will YOU be going to see it?