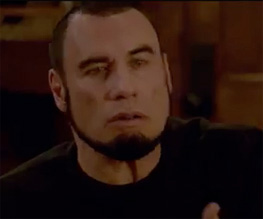 Hey everyone, have you heard about this new film Killing Season? It’s a thriller set in the woods and it stars Robert De Niro, who you may remember from such hits as New Year’s Eve, and John Travolta, who you may remember from being a straight man with a full head of hair. Amazingly, these two actors are starring together in the new film Killing Season and what’s more, there’s a trailer for it in which you can see them acting!

This whole thing reminds us of M. Night Shyamalan’s immortal words from his famous comedy The Happening: “There appears to be an event happening and that event is the trailer for Killing Season“. It just feels like such an important event, doesn’t it? It’s definitely the sort of event that raises A LOT of questions:

Did the producers specify that John Travolta had to grow* hair all the way round his face? Was the beardclava stipulated in the contract? Does Bobby De Niro know he’s in this film and if so what does Al Pacino have to say about it? Who decided to make this film? What kind of red wine is John Travolta drinking when it gets shot by one of Bobby De Niro’s arrows? And lastly, how does it feel to be the one getting tortured?

If you are excited for Killing Season and/or you have any more information on the elusive beardclava, please contact us.