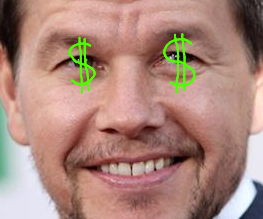 Transformers 4 will make bank. You know it, we know it, Michael Bay certainly knows it, and it looks as if Mark Wahlberg wants some of that sweet, sweet Transformers cash to install a new basketball court in his mansion or something. So far the franchise has made (sigh) $2.6 billion. Michael Bay wrote on his blog:

“Mark is awesome. We had a blast working on “Pain and Gain” and I’m so fired up to be back working with him. An actor of his caliber is the perfect guy to re-invigorate the franchise and carry on the Transformers‘ legacy.”

Although Mark Wahlberg’s presence in a movie has never been a guarantee that it’ll be any good, he has at least impressed people, considering his humble beginnings as a crappy early 90s pop star. His evil deeds are starting to catch up to him. With Transformers 4 looking to top Mark Wahlberg’s list of crappy movies, here are a few of Mark Wahlberg’s crimes against humanity to date:

The Perfect Storm (Patchy beard – bad)
Planet of the Apes (Ape Lincoln – bad)
The Happening (you guys, seriously, The Happening was awful)
Max Payne (just bad)
The Other Guys (John Underwood liked it, so it was bad)

Oh, and just in case you’re not bored enough we’ve also got hold of the brand new Transformers 4 logo, which apparently “incorporates the Decepticon insignia”. What business does an adult human have writing something like that? Anyway, here it is – we don’t care, neither should you.

We expect Mark Wahlberg to transform into a large pile of money when Transformers 4 punches art in the groin in 2014.

Can they really make a Transformers movie without Shia LaBeouf!? Will Mark Wahlberg really be the Viagra for the Transformers’ series?