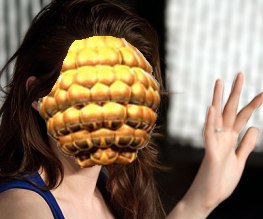 Forget the Oscars – this weekend, Los Angeles played host to the infinitely more interesting Golden Raspberry Awards. After last year’s extraordinary showing, in which Adam Sandler collected eleven personal nominations and his hideous gluey miscarriage of a film Jack and Jill ‘won’ every category, Razzie fans were hoping for another clean sweep – perhaps for That’s My Boy, in which the child version of Sandler’s character sleeps with his teacher and produces Andy Samberg (that’s actually quite plausible). But it’s the Twihards who wept into their dreadful lace gloves all Sunday as the final instalment of the Twilight Saga romped home with seven out of the ten awards.

Surprisingly, only one Razzie has previously been awarded to a Twilight film – although the franchise picked up four nominations in 2010 for New Moon, nine in 2011 for Eclipse and eight last year for Breaking Dawn – Part 1, the only pre-2013 winner was Jackson Rathbone (Worst Supporting Actor for both The Twilight Saga: Eclipse and The Last Airbender). That makes an impressive 21 nominations over the course of three films (Twilight itself didn’t get any, because it wasn’t actually that bad), and as of Saturday Twilight‘s total stands at eight awards won out of thirty-two nominations. Blimey.

As we gleefully reported a couple of months ago, Breaking Dawn – Part 2 was nominated in every category at this year’s Razzies, with a cheeky double-header in the Worst Screen Couple section (creepily, the two couples were Robsten/K-Patz/whatever and Taylor Lautner/Mackenzie Foy, who is TWELVE YEARS OLD and plays a CHILD because she IS ONE). Individual Twilight prizes went to Bill Condon (Worst Director), Kristen Stewart (Worst Actress – jointly awarded for Twilight and Snow White and the Huntsman), Taylor Lautner (Worst Supporting Actor) and Lautner and Foy for their horrible cross-generational werewolf affair. Breaking Dawn – Part 2 also picked up Worst Ensemble Cast, Worst Prequel, Remake, Rip-Off or Sequel and the coveted Worst Picture, meaning that the film only missed out on two acting prizes (R-Patz and Ashley Greene were nominated) and Worst Screenplay for whoever is given the job of hammering Stephenie Meyer’s diseased prose into script form. That’s My Boy picked up the screenplay gong plus Worst Actor for Sandler (inevitable), while Rihanna took Worst Supporting Actress for her role in the generally irredeemable Battleship.

Before we go, though, there’s a more chilling comment to be made on this weekend’s Razzies. However happy we are to see Twilight dragged out into the sunlight and nailed, sparkling weakly, to a great big critical tree, we’re more than a little concerned that failing to win any of his eight nominations may lead Tyler Perry to believe that he has, or may have in the future, any talent whatsoever. Tyler, please don’t be fooled – you’re still useless, but this was the Razzies’ last chance to put the boot into Twilight. There’ll be plenty more Madea films for them to club to death with giant novelty fruit awards.

Do you think Twilight deserved its seven servings of raspberry beatdown? Let us know below!