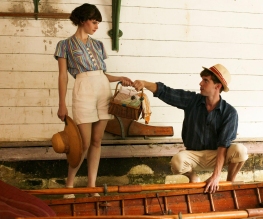 In a month which has so far marched The Wedding Video and A Few Best Men down the aisle, you’re probably in no rush to hear about the next dose of disaster-prone nuptials scheduled to arrive in cinemas.

Nevertheless, Vendetta Films have released the début trailer for Donald Rice’s Cheerful Weather for the Wedding. With responsibility for the preposterous title lying squarely with Julia Strachey, who authored the novella of the same name, the film stars the ever-brilliant Felicity Jones and Attack the Block‘s Luke Treadaway as reacquainted lovers and dedicated wearers of hats as Dolly and Joseph. The issue? Well, she’s in the process of marrying someone else, of course.

Having premièred at the 11th annual Tribecca Film Festival back in April to decent reviews, and recently released in New Zealand, Cheerful Weather for the Wedding doesn’t yet have a UK release date. Given the British cast and setting, however, we shouldn’t have to wait too long to see if it tops the competition of Rufus Hound and a coke-addled sheep.

Previous: London youths smell what The Rock is cooking
Next: Jim Carrey to appear in Kick-Ass 2