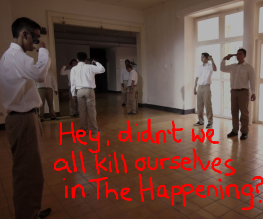 V/H/S/2 was rushed into production after the mild success of last year’s V/H/S. The sequel continues the (rather familiar) format of an anthology of found-footage horror. Several new directors have stepped up to the V/H/S/2 plate, including Welsh boyo Gareth Evans (The Raid) the team of Eduardo Sánchez & Gregg Hale (The Blair Witch Project). The first V/H/S/2 red band trailer has surfaced and it’s just absolutely mental.

Warning: the V/H/S/2 trailer is NSFW – there are 2 frames of boobies thrown in for no reason.

Wow. That was some barrage of random disjointed images. That’s the nature of cutting a trailer for an anthology film, of course, nothing looks connected to anything else, but the V/H/S/2 trailer is particularly frenetic. There’s a weird monster! Now the camera’s attached to a dog! That guy just got hit by a car! Holy crow!

You can levy all the criticism in the world against V/H/S and V/H/S/2 (we certainly have) but what they hell, they’re trying something at least. It’s low budget, it’s cheesy and predictable and unoriginal in concept, but we’ll keep our minds open. They may just surprise us all! Statistics says that’s rather unlikely though.

V/H/S/2 spills its dated magnetic tape all over cinemas this July. Stay tuned for the Best For Film review!

Previous: Chris Pine and Amanda Seyfried to star in Z for Zachariah
Next: Cate Blanchett to star in JFK thriller Blackbird