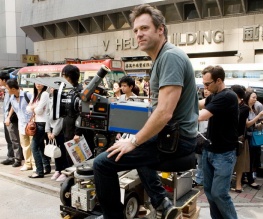 Wally Pfister (whose surname we’re going to resist making a joke over), the cinematographer extraordinaire on all of Christopher Nolan‘s films – including this year’s The Dark Knight Rises – has slammed into the summer’s other big superhero movie, labeling Marvel’s Avengers Assemble as “appalling”.

An Oscar winning cinematographer (for Inception), Pfister is perfectly qualified to cast his opinion, but we can’t help but feel he’s being a bit… well, a bit of a wally (hey, we never said the first-name was off-limits!)

“What’s really important is storytelling. None of it matters if it doesn’t support the story. I thought The Avengers was an appalling film. They’d shoot from some odd angle and I’d think, why is the camera there? Oh, I see, because they spent half a million on the set and they have to show it off. It took me completely out of the movie. I was driven bonkers by that illogical form of storytelling.”

Wally Pfister is clearly not just a cinematographer; he seems to fancy himself as an auteur. The Dark Knight Rises is a beautiful film, and no mistake, but mood and atmosphere have always been important for that franchise. Avengers Assemble, which takes place entirely in the daylight, has other concerns on its mind. Like having fun. And Scarlett Johansson’s bum in glorious 3D.

So a camera angle is utilized to show off a set; so what? The sets were great – why not show them off? It’s hardly as if every scene on the Helicarrier was shot from a mile away so as to include the entire flying behemoth. And if you’re going to depict a war taking place over an entire city, you probably need your camera angles to take in as much of the carnage as possible. If “what’s really important is storytelling”, then the story of Avengers Assemble was told coherently and excitingly – and one might argue far more so than that of The Dark Knight Rises – and the camera-angles utilized did not affect that in the slightest.

We don’t doubt that Wally Pfister has a better eye for things like this than us, but even if he’s right to an extent, and some of the shots were chosen to show-off, rather than placed naturally, that by no means renders the film “appalling”. It’s the sort of thing that only a fellow cinematographer could really get that riled up over.

Could this be a case of sour grapes, after Cap, Iron Man, Hulk and friends took more money than the 2D-only Batman, and generally received more universal praise? It’s entirely possible. Either way, Wally Pfister is making his first foray into the director’s chair soon, with an upcoming science-fiction film, and one thing’s for sure – it had better be fucking FLAWLESS after this.