Warner Bros Studios to be rescued by Superheroes 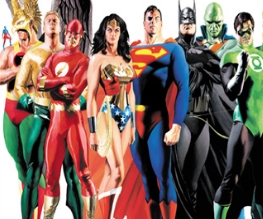 With the money-making Harry Potter franchise coming to its completion next July, alarm bells are ringing for Warner Bros Studios regarding their finances. But instead of swapping their fois gras and melba toast for bread and beans like everyone else a week after pay day, the execs at Warner Bros are forming another get rich scheme.

Their idea? To create another booming franchise to make Harry Potter’s $7.5 billion worldwide earnings look like mere tuppence. And how, you ask? By re-introducing us to the superheroes of our childhood. Think films a plenty, a batman lunch box on every kitchen table and come halloween, more overweight students with latex six-packs. But hey, if it gets us one step closer to saving the world, I’m all for it!

So, prepare yourself for an abundance with the return of a few old favourites; Superman, Batman, The Green Lantern and The Flash. Personally, I’m hoping for a few of the more niche ones; Alley-Kat-Abra and Bouncing Boy would make a good team. With a mystical, martial artist feline and a rather obese, inflatable lad, the baddies better beware.