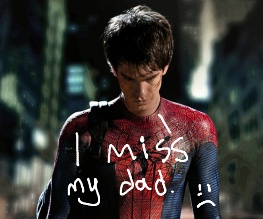 Amazing Spider-Man director Mark Webb has revealed that Andrew Garfield’s Peter Parker will find his way into that rather silly outfit via a different route to Tobey Maguire, star of Sam Raimi’s occasionally well-received Spider-Man trilogy.

MTV reports that Webb “wanted to give the audience something new” and applied himself to exploring the untold (on screen, at least) story of Parker’s dead parents, a development which lends further credence to our theory that the new film will owe much to the Ultimate Spider-Man comic series.

In a further twist, fanboys may well be tearing their spinnerets out at the news that Webb has cut the traditional wrestling match in which Parker first assumes the character of ‘The Human Spider’ (swiftly renamed by a spunky announcer as ‘The Amazing Spider-Man’. Although if they’re real fanboys they won’t be doing that, because the real Peter Parker doesn’t have organic spinnerets like Sam Raimi claimed. They’re mechanical, AREN’T THEY SAM? Marc knows.

Have you ever been mistaken for Peter Parker in China? Let us know below!

Previous: Gary Ross will not return to Hunger Games sequel
Next: Battleship