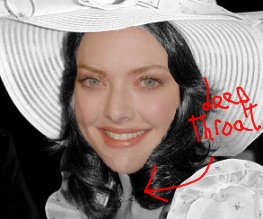 Seyfried and Peter Sarsgaard are considering the lead roles recently vacated by Kate Hudson and James Franco, who was on course to play Lovelace’s manipulative pornographer husband Chuck Traynor before Kate’s pesky baby got in the way of everything. Olivia Wilde was also considering the part, although we’ve heard nothing about that in a while (perhaps someone noticed that she can’t act).

Directors Rob Epstein and Jeffrey Friedman (Howl) have had more than their fair share of dramas with Lovelace, although Matthew Wilder’s competing project Inferno: A Linda Lovelace Story is hardly faring any better. Malin Åkerman (Watchmen) has been brought in to replace Lindsay Lohan after the troubled former child star reportedly ATE THE SET and TRIED TO SNORT ALL THE CAMERAS. Or something. We really don’t think Jesus wants these films to get off the ground…

Amanda Seyfried being gang-raped and forced to fellate people at gunpoint? Blimey. Your thoughts?

Previous: Gilbert Cates dies, aged 77
Next: Top 10 worst things ever to happen to the human body on film