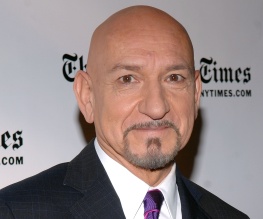 In the first piece of Iron Man 3 news since literally last year (we’re not counting that schtick about the pop-eyed bitch, obviously), rumour has it that baldy thesp Sir Ben Kingsley is to continue his chain of unimaginably odd career moves by starring as the armoured Avenger’s next nemesis. ALLITERATION, YO!

Kingsley, whose recent CV includes hits such as The Love Guru, Prince of Persia: The Sands of Time and the forthcoming The Dictator, is apparently in final negotiations with Marvel and the threequel’s director Shane Black. However, fanboys around the Internet will be sobbing into their model arc reactors at the news that Kingsley will not be playing Iron Man’s legendary foe the Mandarin, a Chinese scientist who wields ten super-powered extraterrestrial rings. Because even in a world where John Carter can apparently be a semi-legitimate superhero simply by going somewhere with low gravity relative to earth, making Robert Downey Jr fight a descendant of Genghis Khan who wears fucking alien jewellery is clearly beyond the pale.

Apparently Iron Man 3‘s vaguely original storyline (it’s based on Warren Ellis’ 2005 story arc Extremis, but we don’t actually read Iron Man so wevs) is going to have something to do with nanobots being part of Tony Stark’s armour and then him getting some sort of nanobot virus (think Venom from Spider-Man 3, but more cyber.) Should have used a Mac OS for your shiny trousers, Tony, shouldn’t you? Except they’re actually not immune either, which is frankly a slap in the face for the smug twats who always talk about their Apple devices as if they’ve been dipped in the river Styx by Thetis. Anyway, it’ll probably all be an elaborate reference to swine flu – Tony will forget to get his nano-flu jabs because he’s busy showing Gwyneth Paltrow all the things you can do with metal fingers, and before you know it Nick Fury will be teaming his eyepatch with a SARS mask and Don Cheadle will die from a previously undiagnosed heart complaint. Or something.

More on this when we can write in sentences again.

Have you read the comics in question? Do you know anything about nanobots? For Christ’s sake comment.

Previous: Teaser for a teaser for a trailer for Looper hits
Next: Hunger Games actress to join Percy Jackson sequel