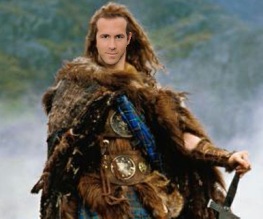 Reynolds would presumably take on the role of Connor MacLeod, originated by Christopher Lambert (Ghost Rider: Spirit of Vengeance, the poor bastard), in the epic story of mostly-immortal swordsmen beheading each other until only one is left and he becomes God, or something. Goya award-winning Spanish director Juan Carlos Fresnadillo (28 Weeks Later) is directing from a script by Iron Man screenwriters Art Marcum and Matt Holloway.

We must stress that negotiations are at an early stage still, and despite his last attempt to reinterpret a classic character (o hai, Green Lantern) Reynolds is very much in demand after the inexplicable success of Safe House. R.I.P.D., his double-header with Jeff Bridges, is due out next year as well as two Dreamworks animations which will bear his dulcet tones. There’s also an ardent mob of RyRey (does anyone say that? It’s revolting) fans waiting on a stand alone film for his X-Men Origins: Wolverine character Deadpool, so perhaps taking on another superpowered swordsman would be a bit too mean…

We’ll keep you posted. For now, why not go and race a stag along a beach?