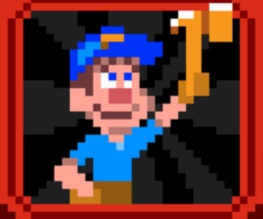 Wreck-It Ralph – Disney’s upcoming animated film about the characters that inhabit the games in an arcade – is already extremely high on the list of films we’re excited for. In fact, it might even be at the top! The story follows the titular Wreck-It Ralph, a nice guy who grows tired of playing the villain in his own game, and decides to explore a few others – with dire consequences for every character in the arcade! The previous trailers have been a total joy, and the happy only continues with this new TV spot.

Featuring Wreck-It Ralph’s nemesis Fix-It Felix (well, nemesis in the game, anyway. Outside of the game, Wreck-It Ralph just wants to be pals!), the TV spot is a pitch-perfect parody of an 1980s game advert.

It’s sure to be a hot blast of nostalgia to the face of anybody who was around in the 80s, as the advert gets all the details spot-on. From the cheesy graphics and sound-effects, to the grainy visuals and distorted audio of an old ad, down to the absurd hyperbole regarding the game itself – “It’s all new! Fully 8-bit! State of the art!” – and the offer of two free quarters to play if you go down on your birthday, the trailer is as charming as it is believable. I mean, two free quarters? WOW! That’s like your great-aunt sellotaping a fifty-pence piece to the inside of your birthday card!

In fact, it’s so convincing, that it appears to have fooled a few commenters on YouTube into believing that the advert is real, and that Fix-It Felix was genuinely once an actual game! It’s a great bit of marketing for the film, and if Disney aren’t actually in the process of knocking up an online version of the “classic game” for real, then they’re really missing a trick.

Previous: Holy Motors
Next: Anne Hathaway for The Low Self-Esteem of Lizzie Gillespie