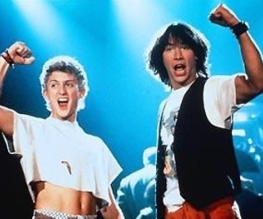 Normally we’re quite loquacious in our reviews but to be honest, all that needs to be said of Bill and Ted’s Excellent Adventure is that it was, just as it proclaimed in Cassandrian fashion, a totally excellent movie.

Bill and Ted came out, oh, 21 years ago… but to most of us it feels like either yesterday or possibly tomorrow… or almost certainly the 1980s, depending on exactly how much time travelling and air guitar you’ve done.

A whole 21 years later and the movie has finally come of age. Oh lordy yes, it can get drinks in a US bar and everything! To celebrate, you can now get your actual real own personal sweaty mitts on a Wyld Stallyns T-shirt. You know Wyld Stallyns, course you do! It was the name of Bill and Ted’s band, the one which won the Battle of the Bands with a little help from Socrates and time travel. 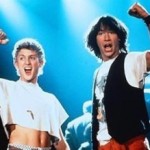 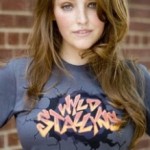 One has to ask why the Wyld Stallyns T-shirt has come out two decades after the film. Was it a severely relaxed case of manana? Or could it be a corroboration of the possibly hoaxy claims that there’s a Bill and Ted threequel on the horizon? Wow, thoughts. Too deep. Deep like Socrates. Thoughts so deep that to think them we had to buy ourselves our very own submarine, which was in some respects fantastic (our own submarine) but in other respects a limitation because we had less budget for procuring Wyld Stallyns T-shirts.

We strongly recommend you get this Busted Tees Wyld Stallyns T-Shirt right now, rather than yesterday, tomorrow or sometime in the 1980s.

Do it because you’re a Wyld Stallyn.

Do it because if there is a threequel (and we really think there might be) it might be quite amusing.

Do it mostly because Alex Winter could do with the financial and moral support.