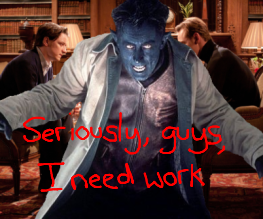 “Someone told me that Nightcrawler doesn’t appear in the story, but I don’t know. I think they would have called by now, but I really like [X-Men 2] and everyone really responded to Nightcrawler. Enough time has elapsed that I would like to go back.”

Although it sounds like Nightcrawler isn’t in the story of X-Men: Days of Future Past, it would be a missed opportunity. X-Men geeks will know that Nightcrawler is actually the product of copulation by Mystique (Jennifer Lawrence) and Azazel (Jason Flemyng). This is why Nightcrawler has Mystique’s Avatar-blue skin and Azazel’s smokey teleportation powers. It’s all a rich tapestry, people! A tapestry of X-Men!

Alan Cumming’s career hasn’t been great since he was axed from X-Men: The Last Stand. Evidently playing the role of Nightcrawler has cursed him somewhat, so a nice juicy cameo in X-Men: Days of Future Past might reinvigorate his career. Although he is known to most people as one of the X-Men, he will always be most fondly remembered by us at BFF Towers as Boris in Goldeneye, who was apparently invincible, although we saw no evidence of this claim. Famke Janssen was also in that movie, so it would be a nice little reunion if they both found cameos in X-Men: Days of Future Past. 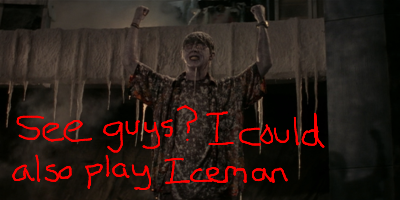 The return of the incredible Nightcrawler to X-Men? What other mutants would you like to see return in X-Men: Days of Future Past?