X-Men: Days of Future Past to feature Professor X? 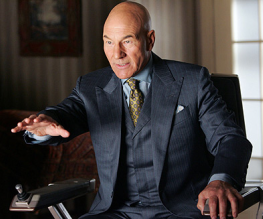 Patrick Stewart has dropped some pretty heavy hints that his character Professor X could feature in the X-Men: First Class sequel, X-Men: Days of Future Past. When quizzed as to the likelihood of his return at the Montreal Comic-Con, he responded with a mysterious, “I think there is every possibility.” He then twiddled his handlebar moustache and started stroking a Persian blue kitten that had been quietly sitting on his lap. (There are parts of this exchange we have slightly embellished for our own amusement, apologies.)

Perhaps aghast at having revealed such a pivotal plot development, he then started dispassionately reeling off cast members that have appeared in previous X-Men films such as Rebecca Romijn and Halle Berry, both of whom play characters that would be highly unlikely to appear given the timeline within which X-Men: Days of Future Past is set, so there is a good chance the old devil was just trying to put everyone off the scent.

As yet 20th Century Fox are keeping schtum on cast details but with James McAvoy definitely set to return as the young Professor X, we’re hoping that the time travel angle will be used so that the elder Professor X can share screen-time with the younger. We’re pretty sure Patrick Stewart could show that young whippersnapper a thing or two about mind control.