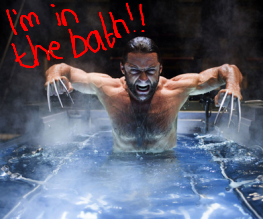 X-Men is returning and Wolverine will be bearing his claws once more! Oh yes, we know full well that this comes as no surprise and is hardly breaking news, but HEY, we’re so excited that the greatest unmanicured antihero since Edward Scissorhands has confirmed an extended appearance in the hotly anticipated X-Men: Days of Future Past. Christmas really has come early.

The lovely Hugh Jackman, wielding his own special brand of enigmatic charm like a pair of adamatine claws, has limited his comments to this eloquent and exciting statement: ‘There will be more claws in this’. We certainly hope so, Hugh. Bryan Singer has done an exceptional job of rounding up all of our favourite mutants for this return to a seemingly ceaseless franchise. Patrick Stewart and Ian McKellen have already been confirmed to return as Old Xavier and Magneto, alongside co-stars James McAvoy and Michael Fassbender supplying us with another two portions of man-meat. Also the beautiful, wonderful, and perfectly freckled Jennifer Lawrence will be setting down her bow to reappear as the young Mystique. OH MY GOD IT’S ALL JUST TOO EXCITING.

Of course we don’t have to wait until July 18th 2014 to see Wolverine getting his claws in, the opaquely-titled The Wolverine should hit our screens on July 25th next year. If, like us, you would happily fork out up-to-and-including ten pounds to watch an hour and a half of Hugh Jackman eating sandwiches, the prospect of two rainy English summers heated up by Wolverine ripping his way through our cinema screens should be enough to make you hot under the collar…

The time-warping potential of the X-Men sequel allows for a huge amount of speculation as to who else may come on board – fingers crossed for a return from Halle Berry‘s Storm, and are we the only ones who miss Anna Paquin as Rouge?

Let us know which X-Man/Woman you would most like to see make a return in Days of Future Past.

Previous: Searching For Sugar Man
Next: The Terminator reboot combines the might of the Ellisons