Zoe Saldana in talks for Guardians of the Galaxy’s Gamora 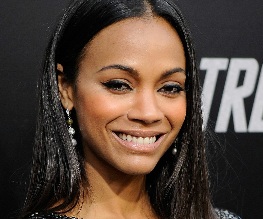 Zoe Saldana, who is becoming queen of the franchises following her previous roles in Avatar, Star Trek and the upcoming Star Trek Into Darkness, is currently in negotiations to star as Gamora in Marvel’s Guardians of the Galaxy. Saldana is a rather sketchy actress, but is extremely beautiful and will look great in Gamora’s tiny and revealing intergalactic get up. Not that this is the sole reason for choosing her, of course. We’re just saying…

Anyway, she’ll join Chris Pratt as Star-Lord and Dave Bautista (as in from WWE for the wrestling fans among you) who is playing Drax. There’s no word yet on who will play Gamora’s lover Adam Walker or any of the other Guardians.

Gamora is known for being the most dangerous woman in the galaxy and, as well as being green all over and super sexy, she has superhuman strength, speed and rapid healing ability. We wouldn’t want to take her on in a bar brawl, basically; not that we get involved in a lot of bar brawls anymore.

We’re not sure how to feel about a film that stars a wrestler – Dwayne “The Rock” Johnson is yet to impress us in anything he’s done on the big screen – but it’s Marvel, so there’s hope. Guardians of the Galaxy is directed by James Gunn and will arrive in cinemas on August 1, 2014.

Is Zoe Saldana a stroke of casting genius, or a bit “whatevs”? Let us know!

Previous: The Hunger Games: Catching Fire trailer at the MTV Movie Awards
Next: Only God Forgives gets red band trailer