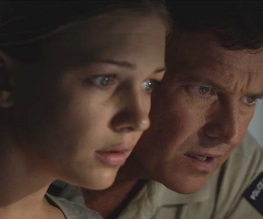 Have you ever wondered what it might look like Apple made a horror film? Hopefully, like any normal person on the planet, your answer is no – however, the writer of 6 Plots seems to have spent more time than is wise pondering this question. Drawing heavily on references from gorenography films like Saw, 6 Plots is a horrific addition to the horror/thriller genre. Sadly it is horrific in all of the wrong ways.

The film opens in an Australian high school where biker-chick Brie (Darling) and a bunch of her nondescript, shiny-haired friends are making big plans for the weekend. The seven teenagers head into class where, horror of horrors, their teacher confiscates their mobile phones and informs them that a device has been placed in the classrooms to block cell coverage. Fast forward to later on that night and the gang break into a swanky house somewhere in town to have a rager of a party… watching YouTube videos of one of them sawing a bunny in half and having one or two beers. Epic stuff. Being the clique crowd they so obviously are, they of course want to show the world how much fun they are having by streaming their party live on the internet for all of their classmates to watch and weep at. Cue dull chat about service providers and begin the obligatory pool party montage.

Things take a turn for the worse later on when Brie wakes up to discover her friends are all missing. After receiving a call from an anonymous psycho killer, she soon realises that she only has a few hours to save the lives of her friends, who have all been locked in boxes and dumped around the town. 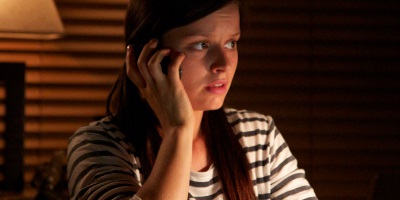 The first thing to say about 6 Plots is that it’s exceptionally dull and full of some of the worse horror writing imaginable, which is quite a damning “first thing”. The majority of the action involves watching people from inside boxes calling each other on their mobiles. In one moment (which was so hilarious it required rewinding at watching again) one of the friends who has been locked in a box and told that he is going to die calls Brie saying “something odd is going on here. I have erratic phone coverage and there is no data connection”. Aaah. Those are some choice last words indeed!

The horror moments in 6 Plots fall completely flat. Even when the boxes begin to be set alight and sent to the saw mill, all that Brie can bring herself to do is start up a conference call. After enlisting the help of one her friend’s dads (who’s conveniently a police officer) it seems like the “thriller” aspect might begin. It doesn’t, as even he seems like an extra in an iPhone advert showing you how to use your phone to save your life. 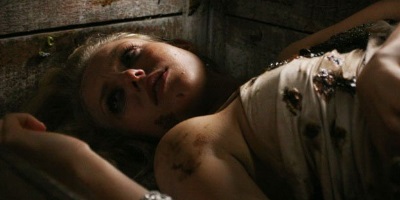 The director and writer have clearly tried to make a point of how much our world today is obsessed by social media. As one by one the Aussies in boxes are dispatched of in various yawn inducing ways, we see that the psycho killer is streaming it all live to an internet site where with each death, the hit rate increases. Alright, so it isn’t the most original premise (The Hunger Games anyone?) but it is hard to find anything good to say about this film.

All in all, 6 Plots winds up feeling like like an episode of Neighbours, just with a bit more blood and a lot more chat about mobile phones. Despite all of their bitching and moaning about poor phone signal, one of the girls who is buried alive still manages to take a conference call – forget the killer, the real question here is: ‘just which network are you using?’. http://credit-n.ru/offers-zaim/otlnal-microzaimi.html http://credit-n.ru/debitovaya-karta.html