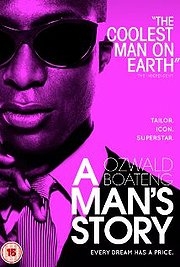 A Man’s Story is the product of 12 years filming the life and times of successful fashion designer, Ozwald Boateng. The son of Ghanaian immigrants, self-taught menswear designer Boateng went on to become the youngest and the first black man to front a shop on Saville Row; the mecca for gentleman’s tailoring. Varon Bonicos, initially agreeing to film this man for 6 months with an end to making a movie about his successes, ended up filming him for 12 years. After doing a bit of maths we can confirm that that’s quite the upgrade. Boateng: self-taught, youngest and first black man on Saville Row; there’s no denying that this a true success story. You’d think that with all that business savvy and slick suited style, they’d be able to come up with a film that’s at least half-watchable. Sadly though, flabby editing, an over-abundance of similar material and selective access to Baoteng’s experiences means that Bonicos film never feels quite authentic, instead ensuring a fairly one-note romp through a (admittedly bloody lovely) suit collection.

Considering the amount of time Bonicos spent with Boateng, you would assume that the director must have been present at some seminal events in the designer’s life. You would assume incorrectly. Well, to be fair we do get to see him meet the Queen and have his car clamped, but issues such as his troubled personal life (he’s been married twice and has three children) seem to be dealt with with hesitation, with Bonicos only ever willing to show us Boateng’s (invariably biased) point of view. Nothing negative in Boateng’s life seems to be his own fault – he openly discusses how he wishes he had more time to spend with his kids, before cheerfully rushing off to China to film some ninjas in a wet field. He could have done that in Wales. Admittedly the Welsh don’t look as good doing kung-fu, but hell, there’s nowhere like Cardiff for an impromptu family trip. Spending twelve years with anyone will distort how objectively you wish to portray them, and you can’t help but get the feeling that Boncio’s desire to stay ‘tight’ with Boateng far outweighs any desire to show him in a practical light. It just gets rather annoying after a while. Boateng – glugging his 7th vodka shot and warbling about feeling inspired and about how tough it is being away from his gorgeous Russian wife – always seems to be pitched as the victim in this story; a good man being hard done by, constantly having to raise himself from the gutter again and again so that he can afford the goldslick silken materials to make his next ludicrously-priced suit.

And that brings us to the second rather difficult problem; it’s obvious that Bonicos had no idea what to do with the hours and hours (and hours) of raw footage he’d gathered over twelve years (did I mention he filmed this guy for twelve years?). What could have been an insightful, inspiring and unique documentary about an ordinary man’s life and his extraordinary successes (he has an OBE, for God’s sake) ends up being a wishy-washy homage that sacrifices genuine insight for entertaining celebration. That bit of twine that’s meant to run invisibly through the middle of a documentary to give it narrative and flow – it’s missing here. You find yourself waiting for that moment when it will all fit into place, but it doesn’t. Boateng is a watchable, interesting and intelligent character, but unfortunately post-production has let him and his story down. At the end of the day – and unlike subject and cameraman – this is one documentary that is anything but ‘tight’.