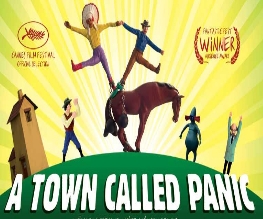 A horse, a cowboy and an indian. An ideal houseshare? A recipe for disaster? Or the blueprint for an ideal, stop-animated film full of wit, charm, delight and surprise with a mere sprinkling of dcatastrophe? Prepare yourself – even if you had Nostradamus on hand, you would never be able to predict the zany events that come up in A Town Called Panic.

It’s Horse’s (Patar) birthday. And slightly dim twosome Cowboy (Aubier) and Indian (Ellison) have forgotten. After a short stress, during which a hawaiian-shirt clad Cowboy attempts to run away to Miami, they decide to build him a birthday brick barbeque. However, in this act of kindness, they end up ruining Horse’s car and destroying his house. HAPPY BIRTHDAY! So after a raucous party which results in a bit of drama (standard – there’s always one who can’t handle their drink.), the three comrades must rebuild their house. Incidentally, the barbeque survives.

All day they build; smoothing and scraping. Hard work for two men and a horse. But what is this? Where is the evidence that they didn’t spend the whole day lying in a pile of bricks, eating hula hoops? Mais non, scare bleu, someone has stolen the house!

And if you are sitting comfortably, then this is where the mysterious, Alice in Wonderland meets Monty Python adventure begins.

A party for the eyes, A Town Called Panic not only keeps you excited but you are always visually stimulated. The jerky, stop-motion animation that makes Tim Burton‘s slick work seem souless, the colours, and the way in which it’s exactly how you imagined your plastic toys interacting when you were asleep, makes it a real treat for kids and grown ups. Imagine Haribo, but without the threat of tooth decay.

Visual thrills aside, the rest of the film is brilliantly put together. The characters and their relationships are better presented than in Skins and more believable too. What with the angry and hyperactive farmer, Steven, who seems to be suffering from small man syndrome and a coke habit, and the strangely homo-erotic relationship between Cowboy and Indian; a bit like Ant and Dec.

“Aren’t you going to pick up your waffle?

Whilst you’re never sure what’s coming around the cloth corner, the story line manages to still make sense. Rather than your standard Disney film where you pretty much know the drill, A Town Called Panic juxtaposes the absurd which, whilst making you question “what in tarnation?”, never leaves you confused. You just roll with it.

But suspending your disbelief isn’t a problem due to the film’s self awareness. In contrast to Harry Potter where you have to believe (for the duration of the film) that all that wizardy stuff is real, A Town Called Panic knows what it is. There are clever little references, like when Horse pumps up the flattened, plastic furniture that reassure the audience that we are not being fooled.

Brilliantly made, clever and comic, A Town Called Panic is a imaginative adventure that is really something – it even manages to squeeze in a bit of romance. There is constant joy to be had, so keep your blinking quick and infrequent when watching.

“You must go to prison for stealing their wall.”
“I found the broom, let’s tidy this all up.”