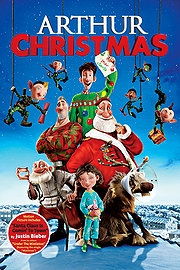 Many centuries after dear old Saint Nick first took to the skies on his mammoth quest to deliver presents all over the world, the twentieth Santa Claus (Broadbent) is notching up his seventieth Christmas at the reins. But things have changed a bit over the past few decades – Christmas is now a regimented and ruthlessly efficient operation, with Santa’s son Steve (Laurie) managing a colossal team of field elves from his high-tech base whilst Santa himself potters down from his futuristic S-1 stealth plane to deliver the occasional symbolic present. Santa is a ceremonial figurehead; or, as he occasionally mutters to his wife (Imelda Staunton), “just a fatty in a suit.”

Steve regards Christmas spirit as a troublesome inconvenience, whilst Santa himself has lost his verve and it’s all his elderly father Grandsanta (Nighy) can do to avoid choking to death on his liquidised turkey. The only member of the Claus family who’s really interested is Steve’s younger brother Arthur (McAvoy), a hopeless idealist who just wants to make Christmas perfect for every kid. So when the elves miss one child and Steve dismisses the oversight as a statistically insignifant anomaly, Arthur – gawky, clumsy, nervy Arthur – knows it’s up to him to save Christmas for one little girl who’s got her heart set on a pink bicycle (with stabilisers). With the help of Grandsanta, his antique sleigh and an elf (Ashley Jensen) who’s really not suited to field missions, he sets off to reach the forgotten kid before the sun comes up… I’m really going to try not to gush here, okay? But MY GOD ARTHUR CHRISTMAS IS FABULOUS. Kids will be entranced from the first scene by the spectacular visuals and use of 3D, whilst adults will smirk at the Mission: Impossible references and breathe a sigh of relief when they realise that the 3D is actually pretty restrained. The inoffensively child-friendly visuals persist throughout the film, creating a welcoming atmosphere which is heartwarming without being twee and complemented by a script which will appeal to all ages without resorting to firing snide innuendoes over the heads of the under-10s.

The cast is similarly well-constructed, with James McAvoy sounding quite unlike his newly suave self as the endearingly useless Arthur. Jim Broadbent continues to play harmless old Jim Broadbent, rumbling away to himself from behind a huge stomach, whilst Hugh Laurie’s Steve is as acerbic as House and as frightfully English as Bertie Wooster. Bill Nighy clearly made this film to chill out after Page Eight, and has a marvellous time cackling and talking nonsense (“They used to say it was impossible to teach women to read…”), whilst Ashley Jensen once again demonstrates the flair for voice work which made her one of the highlights of the otherwise unremarkable Gnomeo and Juliet. It’s all gravy, basically. Last year, the most Christmassy film anyone saw was Rare Exports (which isn’t even that Christmassy, but any port in a storm). This year we’ve been served up a quintessentially beautiful Christmas tale which will warm every heart that is lugged into a room where it’s playing. That’s marvellous, and I don’t think we should spoil it. So let’s not bitch and moan like we always do, let’s just all go and see Arthur Christmas right away and smile at the world. Okay? Okay.

Previous: The Mirror Mirror trailer is here
Next: Bill Nighy to play a demon in I, Frankenstein