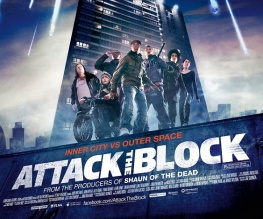 Hot on the heels of the underwhelming Anuvahood, the last spasmodic twitchings of the dearly departed UK Film Council have produced another one of those ‘urban’ films designed to confuse American audiences and delight anyone who appreciates being plunged into the authentic atmosphere of a Brixton mugging. But with this sweary, violent council estate drama, there’s a difference – and the difference is called MASSIVE FUCKING ALIENS.

It’s Bonfire Night, and Sam (Whittaker) is ill-advisedly walking home alone, after dark, on the phone to her mum. It’s no big surprise when a gang of hooded youths fan out in front of her and demand her purse – at least, not compared to the meteor which hits a nearby car mid-mug, allowing Sam to scurry home whilst chief hoodlum Moses (Boyega) and co. investigate in the hope of finding “bare valuables”. However, any swag which might have been hiding in the glove compartment is more or less obscured by the angry, bitey thing in the passenger footwell; it cuts Moses’ face and heads for the hills, but the boys hunt it down and show it what unwelcome visitors to ‘the Block’ can expect – a determined trainer in the face, and possibly a knife in wherever alien invaders don’t want to have a knife put.

The gang take their prize back to the tower block which they – and, coincidentally, Sam – call home, intending to stash it in the top-secret Weed Room belonging to unstable gangster Hi-Hatz (Jumayn Hunter) and diligently managed by local stoner Ron (Frost). However, as the fireworks continue across South London they start to notice more bright lights heading down rather than up – the “gorilla wolf motherfucker” which they’ve killed is looking less like a lone ranger and more like an advance scout. The Block’s attackers are big, nasty and have about two hundred glow-in-the-dark teeth each, but they don’t have mopeds or baseball bats or a rucksack full of bangers. Looks like this could go either way… Try as I might, I genuinely can’t come up with anything I want to criticise about Attack the Block. Joe Cornish has some writing experience (he co-wrote forthcoming feature The Adventures of Tintin and will be scripting Ant-Man with Joel Kirby), but nothing approaching the background which his confident and well-flowing script suggests – the dialogue is snappy, witty and mercifully free from clichés, and Cornish’s bold use of London’s unique vernacular belies his normal Westminster School-influenced tones. His direction makes the most of the film’s evocative mise-en-scène, taking in the bleak estates which are made steadily bleaker as the normal cast of muggers and winos are replaced by something altogether more frightening.

Really, it’s just the marketing team who deserve a slap on the wrist. Contrary to what posters and the trailer would have you believe, Nick Frost and Luke Treadaway appear in supporting roles; it’s a shame that, Jodie Whittaker aside, the excellent lead cast’s names aren’t where they deserve. John Boyega’s brooding, imperious Moses, the impulsive mugger who realises his actions have endangered everything he holds dear, is an unbridled delight, whilst other highlights include Alex Esmail as wise-cracking stoner Pest (“I’ll be back soon, Nan!”) and Hunter’s convincingly deranged Hi-Hatz. Channelling the goriest and most plasticky of the monster B movies, Attack the Block manages to make a virtue of necessity by letting its slightly low-rent effects hark back to the Plasticine aliens of yore (whilst working in a few lines of dialogue which explain the attackers’ unusual physiques). It’s skilfully done, and evokes the spirit of 80s horror just as convincingly as other scenes echo The Warriors and Streets of Fire. It really is all there – the script delivers, the scares are jumpy, the action is packed and the performances are almost irreproachable. I can think of one other debut film that is as assured and competent as Attack the Block, and that’s Reservoir Dogs. A triumph.