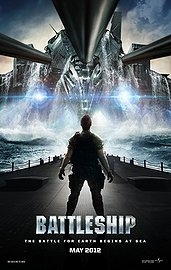 Credit where words of some kind are due, Peter Berg certainly knows how to make things explode. Approximately 90% of Battleship is explosions – explosions in some water, explosions near a beach, all of China exploding, your will to live collapsing violently through your mouth – and considering just how long it is, a cool 131 minutes, that’s more Things Blowing Up then you can expect from all the Die Hards put together. What makes up the other 10%? Why that would be people saying the phrases people say just before things blow up. At one point, Rihanna says “boom” quite quietly, and it’s juxtaposed nicely with THE FUCKING MASSIVE BOOM OH MY GOD SO MUCH BOOM RIGHT IN OUR FACES that comes about a millisecond later. It’s an elegant dance between blowing up and preparing for things blowing up, and by the end of it (I think it ended, I think), you can’t help but feel like everything in your life that so far hasn’t blown up has somehow let you down. Battleship isn’t a film, is what I’m saying, it’s a weapon, and the only respite you get from the pure, unadulterated noise onslaught is in the re-loading between rounds. Anyway, I’ll spend about as much time on the plot as I can only imagine the story-boarders did, which is about two sentences worth: aliens are coming. FUCK THEM. Everything else is basically immaterial; there isn’t so much a script as there are two word vats, one labelled “exposition” and one labelled “one-liners”, the contents of which are ladled with a cheery splat on whichever character happens to pointing at the Loud Thing Happening At The Time. Taylor Kitch is our Hero, a doofus-turned-good determined to marry Chick With Breasts after coming back from some naval practise exercises. Problem is, her Dad is Liam Neeson, and I think we all know enough about Liam Neeson’s frowns to know that he HELLA AIN’T gonna let his daughter marry some renegade Navy commander. BUT, when Kitch is suddenly left in charge of a massive battleship when aliens attack and lock down some bit of water they’re in for some reason (seriously if anything I’m plugging the gaps here) it’s up to him to take out the pesky extra-terrestrials, save the world, solve racism, avenge his brother and shout so damn loudly that we STILL can’t hear any dialogue over the flabbergastingly shredding soundtrack. So, is he the man for the job? The fact that this is a film where he obviously is says YES, but the fact that his is a face is so bland he’s genuinely trickier to pin-point in a scene than an alien ship deep in the waters of the Pacific says NO. Much of your viewing experience of Battleship will be spent thinking “who is this douche-bag now? Who is this new shouty man?” – the answer is, it’s always Taylor Kitch. Even when you’re SURE it’s someone else, it’s not. It’s him. Even when it’s Rihanna, or Alexander Skarsgård, or that kid who looks like a teen baddie out of Power Rangers, it’s him, and he’s screaming, and the aliens are coming, but are they aliens or is it Taylor Kitch again, and god I can’t think, it’s so loud, so unforgivably loud and hang on, someone was pithy, was that pith that just happened? How can anyone involved in this be capable of pith? TAYLOR! TAYLOR? PLEASE DON’T LEAVE ME TAYLOR FOR THAT LASS WHO’S CLIMBING THAT SIGNIFICANT HILL CHEST-FIRST, YOURS IS THE ONLY FACE I KNOW AND THE ONLY ONE I CANNOT REMEMBER.

This is what Battleship does to you, it makes you question the very fibres that make up reality. The thing is, the thing that makes Battleship so utterly mind-bending is that – despite all evidence to the contrary – it’s not totally devoid of humour. Managing to, at moments, bring a light-hearted self-awareness that Michael Bay could only dream of, this film is almost saved by its own willingness to mock itself, its origins and the fact that everything we’re watching is supremely ridiculous. Surely no writer could insert the line “THEY AIN’T SINKING THIS BATTLESHIP” unless they WANT US to climb aboard and just enjoy the ridiculous ride? But for every jovial aside or grounded remark there are literally four thousand explosions, and by the time we’re supposed to tear up at noble pensioners using a museum-ship to blast the fuck out of Iron-Men: Lizards O’Clock, the whole thing collapses under the weight of its conflicting objectives and sinks with the kind of gravitas borne only of Everything Being Loudly Destroyed Forever.

Ultimately, writing about Battleship feels a bit like jumping about income tax – no human words can possibly do justice to the clattering, booming, spitting and ENDLESS aural onslaught that it mercilessly subjects you to. At the end of the day, or world, or whatever you want to call it, watching this film is certainly a noisy, fever-inducing waste of two and a half hours of your life. But what a waste it is.