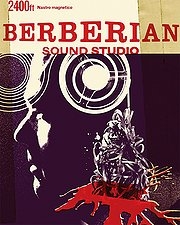 There are a lot of very clever people out there in the world. Sadly most of them don’t work in the horror filmmaking business. Every wannabe director with a half-decent video camera can call themselves an auteur (Oren Peli, I mean you). Not so however with Peter Strickland’s Berberian Sound Studio. With true visionary style and flair, Strickland creates a hellish nightmare world for you, and then leaves you trapped there with no way out. Wacky, weird and perversely wonderful, Berberian Sound Studio deserves all of the praise it gets. Just remember, “this is not a horror film, this is a Santini film”.

Set in Italy in the 1970s, the film follows the story of Gilderoy (Jones), a twee and reserved British sound engineer who is brought over from the South Downs to work on giallo slasher film Equestrian Vortex, which has been made by the experimental director Santini (Mancino). Gilderoy’s job is to create the foley sounds for the film and armed with a multitude of vegetables he sets about his work. From the moment he steps inside the characterless hallways and the gloom of the recording studios though things turn from bad to worse. Soon the darkness begins to take over and Gilderoy’s grasp on reality begins to fade as he suffers mercilessly at the hands of the film’s brutish producer before being sucked into a world of sickening horror that he is just not suited to.

Using only sound to create the horror, Berberian Sound Studio manages to become one of the most terrifying and disturbing films that has been made for a very long time. We never actually see what is happening in Equestrian Vortex, but your imagination is more than able to fill in the gaps. Marrows being smashed on the ground are used to accompany the body of a woman falling out of a window, radishes being twisted and torn make the sound of a priest ripping a witch’s hair out, and there is something to do with a pan of sizzling hot oil that you just don’t want to know about… However you begin to morbidly want to see what exactly is happening on screen, whilst simultaneously thanking your lucky stars that you are not. 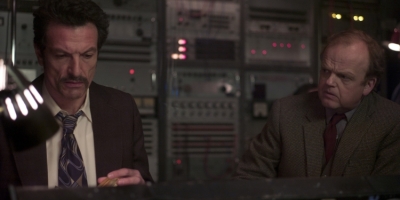 Unsurprisingly, Toby Jones is marvellous as Gilderoy, a part he was born to play. Gilderoy receives frequent letters from his mother who he lives with back in England, reminding us constantly that he does not belong in this bizarre and dangerous world. You pray that nothing bad will happen to such a lovable character, but know as soon as the sound recordings for the “dangerously aroused goblin” begin there is very little chance of him making it out unscathed. You soon find yourself as lost as Gilderoy is as the film starts to turn into a Lynchian nightmare.

Strickland’s film is essentially an homage to horror films from the 70s, drawing on inspiration from Bray Studios where the Hammer Horror films were made and even throwing in a Roger Corman-esque dream sequence which leaves you feeling completely disorientated. There are also very heavy influences drawn from the films of David Lynch that put you on edge as the film twists and turns in directions you never expected it to take. This is a lot smarter than your average horror and one that at times comes across as being a bit too clever for its own good. However the overall lasting impression that the film makes is enough to terrify and upset even if you are not up to scratch with your classic horror film references (shame on you).

The friend who accompanied me to the cinema perhaps summed up this film in the best possible way: “it’s like watching your mother being punched in the face and not being able to stop it.” Now I don’t think that anyone has ever come out of a British horror like Truth or Dare (where you bay for teenage blood) and declared anything other than “that was rubbish, let’s go for pizza.” Berberian Sound Studio is the film of the year so far…with absolutely no shaky found footage in sight. http://credit-n.ru/offers-zaim/mgnovennye-zaimy-na-kartu-bez-otkazov-kredito24.html http://credit-n.ru/offers-zaim/moneyman-srochnye-zaimy-online.html

Previous: Transformers 4 to go ahead without Prime, Megatron, et al?
Next: Savages