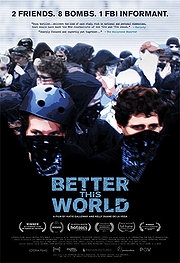 As Better This World begins, it’s difficult not to assume this is going to be a simple story of two politically boisterous young men who got carried away. Through contemporary news footage, we learn that David McKay and Bradley Crowder formed part of a “radical group” arrested for preparing explosives before the 2008 Republican National Convention. However, they do not consider themselves anarchists. Asked during an FBI interview how he would describe himself, McKay responds; “I don’t know, American citizen?” Speaking more recently, this time from a jail cell, he is able to clarify. “When you see somebody poisoning what you love, what you believe in, if you allow yourself, you’ll become somebody who fights against it.”

At the outset then, perhaps the only detail that seems harsh is their sentences – two years for Crowder, four for McKay – a long time for a pair that staunchly claim they never intended to cause anything more than criminal damage to an almost empty parking lot. Yet the events behind their arrest provide fascinating viewing. How did two men in their early twenties with no history of unusual or violent behaviour come to be charged for a perceived terrorist plot? The answer, it seems, may rest on two distinct factors – the legacy of 9/11, and an activist named Brandon Darby. The first is perhaps to be expected; the FBI’s number one priority since 9/11, we are reminded, is the prevention of terrorism.  The role of Darby, however, proves a far more intriguing influence.  A decade older than McKay and Crowder, Darby was leading founder of the Common Ground initiative, a group well known for its aid work during the aftermath of Hurricane Katrina. For a pair of Texas born youths used to nothing but conservatism, he was an idol; a shining example of the change you could achieve if you really got involved. Yet from the story of their very first meeting, it becomes clear just how much involvement Darby really demanded. “You look like you eat too much tofu,” it’s claimed he told them, “eat beef and gain muscle mass, or you won’t be able to fight anybody.” From Darby’s introduction onward, the film is consistently compelling. E-mails, text messages and firsthand accounts flesh out his influence over his young progeny, with his constant mantra of “expect violence” extending to such statements as “the police will try to intimidate us in jail. They’ll put us in cells with people who want to ass rape us. I’m prepared to deal with that.” Darby’s message throughout seems to be that if you’re not challenging the law, then you’re not doing enough. But then suddenly, just as the boys get onside, things change. It’s impossible to state how without ruining the film’s impact, just know this – finer plot twists are rarely found in works of fiction, let alone documentaries. Intricately researched and perfectly paced, Better This World uses Darby’s arc as its centre, presenting opinion from both sides of McKay and Crowder’s case. Gathering testimony from family, lawyers and FBI agents who were either directly involved or have served as seasoned professionals, it paints an absorbing picture of the forces acting on the men’s sentencing. There’s a conclusion to be drawn from every angle – boys led astray, victims of circumstance, or just plain dangerous – but as matters draw to a close and Darby takes on his final turn, it’s hard to escape the feeling that more than a little duplicity may have been in the air.