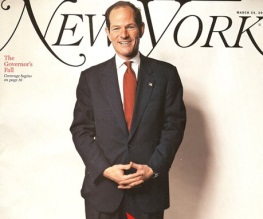 Client 9′s producer and director, Alex Gibney, is an issues man. His next documentary will focus on wikileaks founder Julian Assange, and previous features have included profiles on Lance Armstrong and Hunter S Thompson. He obviously has a taste for big men with more than their fair share of secrets, and seems to have found his perfect player in Elliot Spitzer. Not only is the former NY attorney general a tireless socialist, working for the rights of illegal immigrants and gay marriage, he is also a john who, according to escort ‘Angelina’: “likes to get his money’s worth.” In a documentary that is openly left wing, Gibney interviews Spitzer, his enemies, and the escorts, and asks where it all went wrong.

As juicy as the sex stuff is, we get the feeling that Gibney is most interested in the bankers on Wall Street, and their burning desire to get Elliot Spitzer off their metaphorical front porch. The film questions how scandalous the scandal actually was: why could numerous other politicians reveal near-identical sexual proclivities and stay in office, whilst Spitzer was left no choice but to resign? Why did the FBI focus so much on client 9 (who turned out to be Spitzer) in their investigation into the prostitution ring? Gibney seems to conclude, with help from interviews with Spitzer’s former aides, that the whole affair was a set-up, used to disguise the shady dealings of banks and insurance companies that led to the worst economic recession since World War II. The main interviewees in the feature are as follows:

Elliot Spitzer, named as client 9 in FBI documents on the prostitution ring, is a Jewish, Princeton educated democrat; the modern Robin Hood (if Robin Hood liked hookers). He pursued predatory lending practices by mortgage companies (the main reason for the recession: banks lending money to people who couldn’t pay it back), price fixing, and insurance fraud, which leads us to enemy numero uno, Maurice R. Greenberg.

Greenberg was the snake-like chairman of the American International Group (AIG) from ’68 to 2005. He was forced out by Spitzer after being accused of accounting fraud; namely, borrowing $500 million to increase the share price of AIG, and Gibney must be credited in persuading Greenberg to talk about the highly litigious allegations.

Richard A. Grasso was the former chairman of the NY Stock Exchange, receiving a $140 million compensation payout from a committee which he himself was supposed to regulate. Grasso came to stand for all that was wrong with the American Stock Exchange, but the film attempts to portray him as more than just a 2D villain, with Spitzer even telling the cameras, “Dick is a nice guy.” Whilst all the brouhaha around Spitzer’s call girl focused on Ashley Dupre, his favoured escort was actually a girl who went by ‘Angelina.’ Due to her reluctance to be shown on camera, Client 9 uses an actress to play her; a feature that somewhat distracts.

The calibre of the interviewees Gibney gets is undeniable, yet at times the production of the feature seems a little clunky. When Spitzer is referred to as a ‘shark’, we are treated to a nice 30 second clip of a mechanical shark swimming towards a camera, and any references to escorts summons up some terrible shots of random girls on the street. Note to Gibney: possessing lady-parts, and being outside when it’s not daylight does not a lady of the night make.

Ultimately, Elliot Spitzer blames none of his enemies in his final interview, saying “it was no-one’s fault but my own.” Whilst he eats humble pie, Client 9‘s sympathetic POV ensures that we feel the governor’s fall from grace was wholly undeserved.

Previous: Morning Glory
Next: How Gnomeo and Juliet was allowed to happen