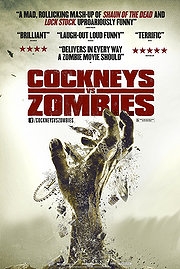 You’d be forgiven for thinking that The Expendables 2 would be the OAP blockbuster for the summer. Whilst the cast for that film clock up a pretty serious amount of years between them, the four older cast members alone in Cockneys vs Zombies collectively come to an impressive 388 years old. Sadly it is only the cast members who have freedom passes that save Cockneys, and what should have been a hilarious joke-a-second romp through Bow actually winds up feeling rather…dead.

Cockneys vs Zombies begins promisingly enough. In London’s East End, a pair of dim workmen discover a tomb from the 17th Century buried beneath a site where they are building new luxury homes. Paying no heed to health and safety (pretty unbelievable considering this is England) the duo smash their way in to have a poke around. Unfortunately they are attacked by a zombie skeleton which spreads a plague across the capital. Meanwhile, bumbling brothers Terry (Hardiker) and Andy (Treadaway) are planning to rob a bank in order to get enough money to save their granddad’s care home from closing. Assisted by their kick-ass cousin Katy (Ryan), Mental Mickey (Ashley ‘Bashy’ Thomas) and deadbeat friend Davey (Jack Doolan) their plans soon go awry as the zombie plague catches up with them and they are forced to the care home to save their granddad (Ford) and his pensioner pals from certain, bloody death. 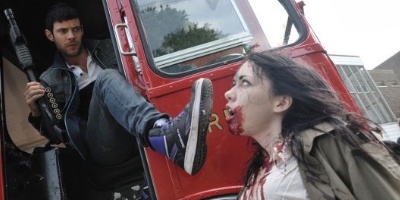 Cockneys has a really great, comic book style opening credit sequence, which leaves you in no doubt as to what the tone of the film will be; gory, over the top and very funny. Sadly, the rest of the film pays little attention to this set up and isn’t able to come up with enough jokes that work. Whilst there are moments that shine in Cockneys many of the laughs feel repetitive, with pensioners rattling off reels of cockney rhyming slang, exploding zombie heads and the geezer brothers trying their hardest to get their comic timing moving faster than a snail. At one point whilst looking at one of the zombies trying to stagger along slowly, someone asks if that is as fast as they go. Unfortunately the zombie in question moves a lot faster than the plot of the film which is essentially just scenes with our heroes trapped first inside a bank, then a warehouse and a care home.

This is the biggest problem with the film. The plot feels so incredibly thin you wonder when it will all get going before suddenly realising that it is over. The writers shove in subplot after subplot with hostage stories and also a very unnecessary detour to find someone’s sister halfway through. At times it feels like they really struggled to get this quirky idea to feature length. The pacing throughout is very odd and although Cockneys begins unbelievably quickly, with the workmen having their faces eaten off quicker than you can say ‘brains’, it gets held up a million times whilst the script also attempts to shove some characters into the story. Even this is not done with the most amazing amount care, and the characters, whilst likeable, are cliched. You know from all of their first sentences who will live and who will end up as zombie food. 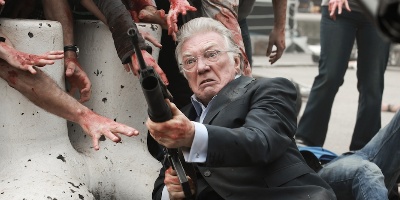 The one thing that saves Cockneys from just being a straight to DVD, Shaun of the Dead rip off is the glorious performances from the older members of the cast. It perhaps would have been better if the whole film just focused on them and left out all of the trite younger generation entirely. Whilst Alan Ford does a great turn as aging hellraiser Ray, it is Richard Brier who steals the whole show with his gloriously geriatric performance as Hamish. It is Hamish and co who deliver all of the laughs in the film, with Brier doing the most amazingly tense and hilarious zimmer frame vs zombie chase scene. Playing on the how-slow-can-a-zombie-go idea with the old people is brilliant and something that could undoubtedly have been spun out for longer. Honor Blackman shows that she still has the Bond girl instinct in her toting an Uzi like a pro and making it look far cooler than dull Michelle Ryan ever could.

It is probably worth seeing Cockneys vs Zombies purely for the pensioners alone. Whilst there are some cute and funny moments throughout, Cockneys somehow manages to feel rushed whilst simultaneously move ridiculously slowly…not much unlike an OAP trying to outrun the undead.