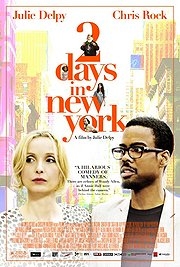 There’s a sad story behind this film. Marie Pillet, Delpy’s mother both on and off screen, died in 2009 leaving behind Delpy and actor husband Albert. 2 Days in New York ends with a memorial to Pillet, but the real tribute is the story of the film itself, which portrays protagonist Marion attempting to cope with the loss of her own mother, whilst juggling a love life, motherhood, career and the encroachments of her visiting family. Loss is a theme which underpins 2 Days in New York and with a filmmaker such as Delpy, whose work – as with onscreen alter ego Marion – is deeply rooted within her own life, it is often difficult to separate the art from the reality. This makes it difficult to actively dislike Delpy’s work because its heart is always so firmly in the right place. But considering the joyful ease of this film’s predecessor, it’s hard to watch without coming away a little disappointed. At the film’s opening, photographer Marion (Delpy) and radio personality Mingus (Rock) are happily shacked up following the dissolution of Marion’s relationship with Adam Goldberg’s Jack, star of the previous film (and distinctly absent from this follow-up). They live in a bijoux little flat in New York with Marion and Jack’s toddler son Lulu, and Mingus’s daughter Willow.

Everything appears to be coming up roses for the couple, that is until the arrival of Marion’s Parisien family: sexually-charged sister Rose (Alexia Landeau) and exuberant father Jeannot (Delpy), alongside irritating tag-along Manu (Alexandre Nahon). Before long, the level-headed Mingus is at his wits’ end with Marion’s family, causing friction between the two. And all the while Marion has problems of her own – repeated clashes with her sister, mood swings, nosy neighbours and a forthcoming photography exhibition where she will “sell her soul” as a piece of conceptual art. It’s a familiar comic set-up. Happy couple finds their life together disrupted by rowdy, variously unhinged family members, all leading to a sentimental, loose-ends-tied-together conclusion. Delpy does, though, produce some moments of charming originality, no doubt inspired by the presence of her real-life father. The best scenes revolve around the fraught but comedically fruitful bond between Marion and Rose, perpetually caught up in childish, rivalrous squabbles that are refereed by an appalled Jeannot, labelling his daughters “harpies”. Delpy and co-writer/co-star Landeau’s insights into the intricacies of sibling relationships help in this regard, resulting in funny, lifelike moments such as exhibitionist Rose attending a yoga session in a revealing vest and Marion being put off her downward dog by the appearance of a rogue nipple. Elsewhere, the affectionate but incomprehensible babblings Jeannot directs toward Mingus provide the biggest laughs. For some strange reason, though, Delpy frequently veers away from the effortless naturalism which carries these scenes and made 2 Days in Paris so successful, by entering her characters into bizarrely heightened, irritatingly convenient situations, the worst and most jarring of which revolves around Marion selling her soul to a Hollywood actor (who shall rename unnamed for sake of spoilers).

And when Delpy isn’t forcing the plot forward like a stalling car, she is retreading old ground from her previous film: the mischievous Jeannot keying parked cars, Marion’s partner becoming suspicious about her fidelity, the inevitable confusions stemming from the language barrier. Also problematic is the development of Marion and Mingus’s relationship. While the neurotic Jack was a perfect match for Marion’s chaotic energy, Rock’s Mingus is a little too normal – perhaps his oddest characteristic is a fondness for conducting conversations with a cardboard cutout of Barack Obama.

Ultimately, you could do worse at the cinema than seeing what is a charming, occasionally hilarious film about families and relationships, but when held up to its predecessor, 2 Days in New York really doesn’t compare. Bof.