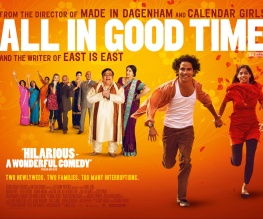 “Heartwarming” is probably the word that will come to be most associated with All in Good Time. And indeed, it is heartwarming. In a kind of vaguely boring, Calendar Girls way. In much the same way as you would find a subpar romantic comedy starring Ginnifer Goodwin that you watch on a plane at four in the morning “heartwarming”. You know, what with all the sleep deprivation. Perhaps I’m being too harsh. But there’s nothing that feels particularly modern, relevant or original about All in Good Time. A couple of funny and poignant moments, and several winning performances aside, Nigel Cole’s film is a slight, largely uninspired effort. At the film’s opening Atul (Reece Ritchie) and Vina (Amara Karan) are in the midst of their wedding ceremony, shyly embarking upon their first dance as married couple. Amongst the crowd of onlookers are Atul’s parents: the rotund, high-spirited Eeshwar (Harish Patel) and his long-suffering, dignified wife Lopa (Meera Syal). Once the wedding is done, Atul and Vina return to Eeshwar and Lopa’s home to begin their life together, starting with the wedding night. But with the snoring Eeshwar in the next bedroom, Atul and Vina find themselves unable to consummate their hours-old marriage. First night problems out of the way, the couple quickly realise that living in the claustrophobic environment of Atul’s family home may be doing more harm than good to their relationship and before long the audience is left asking whether or not the young lovers will make it (SPOILERS: they will, obviously). There’s much in All in Good Time that deserves praise. Frequently the script is sweet and witty, and Karan’s lead performance is all warmth and authenticity – in contrast to Ritchie’s slightly cold, verging-on-unlikeable Atul. As evidenced by East is East, Ayub Khan-Din is a writer who is good on the funny, idiosyncratic details of family life, from the intrusion of gossipy neighbours to the boorish table manners of father Eeshwar. But somehow in the hands of Cole, the fine comic tuning that made East is East such a success is largely absent. And moments of quiet, subtle detail – such as Atul helping to unwind Vina’s seemingly endless yellow gold sari on their wedding night – are often lost amidst scenes that trundle on for too long, rehashing conversations that have gone before.

Essentially, the main problem with this film is that it began life as a stage play (the critically acclaimed Rafta Rafta) and, unlike other recent films which have made the transition succesfully – The Ides Of March, The Deep Blue Sea – the distinctly small amount of plot becomes quickly apparent. Perhaps the most interesting strand (and really the only counterpoint to Atul and Vina’s) is a relatively underplayed back story involving Lopa, Eeshwar and an old friend of theirs, Brijesh. Even the subtlety with which this is handled, though, is sacrificed in place of a clusmy, abrupt ending only serving to undercut any kind of genuine emotional resolution. Ultimately, it’s hard to sit through All in Good Time without cracking a smile every once in a while. But it’s a shame that it has nothing much to offer up that we haven’t all seen before, and the effect is a film that is largely forgettable. All in Good Time will probably warm your heart, but it’s unlikely to make a lasting impression.