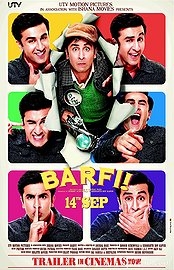 If someone had told us that a Bollywood film set in the 70s about a deaf-mute caught in a love triangle between an engaged “it” girl and an autistic adolescent had the potential to be the most emotionally affecting film we’ve seen since The Green Mile, we wouldn’t have believed you. In fact, the film’s first half hour had us almost completely convinced that this would be a film of the “so bad it’s good” variety, and we were all set to come to work this morning, armed with scathing words with which to verbally rip Barfi to shreds. Then something wonderful happened. Quite simply Barfi became awesome, and stayed awesome until the film’s end and we’re still trying to figure out it happened.

Through a series of documentary-style flashbacks we are introduced to deaf-mute Barfi, (Kappoor) a happy-go-lucky character who has spent so much of his life getting into various scrapes and hi-jinx that he has become a legend in his town. The object of his affection Shruti (D’Cruz) is engaged to a man she does not love and is having a hard time deciding between Barfi and the more suitable man her parents want her to marry. The worst part of the film are the sequences that choose to focus on this aspect of the plot. From The Notebook to Beauty and the Beast the notion of a privileged woman unable to decide between her head and her heart has been done to death, and if viewers can just bear through the first twenty minutes of Barfi (which though admittedly amusing, are vastly inferior to the rest of the film) they’ll be in for a treat. In forewarning, this will unfortunately mean sitting through some really silly screwball comedy sequences lifted directly from various Benny Hill episodes.

The film really comes into its own with the introduction of autistic teenager Jhilmil (Chopra) and it is a wonder that the film was not named after her for she is the true star of the show. Chopra turns in an Oscar-worthy performance as the shy and mentally challenged teenager who takes a liking to Barfi, and through a bizarre set of circumstances brought about by a plot much too convoluted to unpick here, they come together to form a unique and moving bond. There is no question that viewers may feel uncomfortable with the romance that develops between the two; just describing the plot makes us a feel as if we’re about to tell a really distasteful joke but the odd thing is: it totally works. We’re not sure if we’re just in a very weepy place right now but this film had us crying into our popcorn from all the sweetness to be found in the film’s central message that love can neither be restrained or defined by societal definitions of normality. 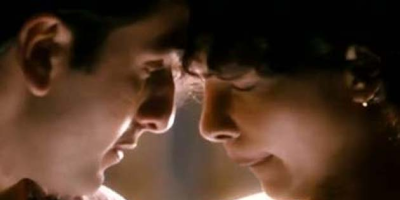 Make no mistake, Barfi is far from perfect. With a plot that includes a kidnapping, a bank robbery, a road trip, a wedding and a case of mistaken identity, all whilst simultaneously attempting to cover implausible leaps forward in time, Barfi makes for an eventful ride but it is by no means smooth and has definitely bitten off more than it can chew. Bollywood fans will also be disappointed at the distinct lack of dancing numbers and spectacle, but can take heart that the usual habit of ripping off famous scenes from mainstream movies is alive and well as we counted at least five scenes which have been taken directly from well-known films. 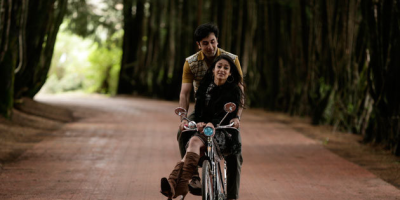 Tonally, and particularly for the first half of the film, Barfi is all over the place and features an awkward juxtaposition of slapstick and drama that doesn’t iron itself out until halfway through the film. Strangely, the director made the decision to have the lead actors play the older versions of themselves and with the only attempt at making the actors appear older coming in the form of bad wigs, whatever the makeup team were paid for this was too much. Still, Barfi remains a strange kind of wonderful with an endearing central message and viewers are sure to be charmed by its sweet brand of humor.

Previous: New Photos from Kick Ass sequel released
Next: The Hobbit: An Unexpected Journey gets a second trailer 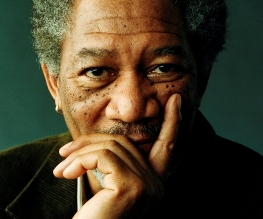 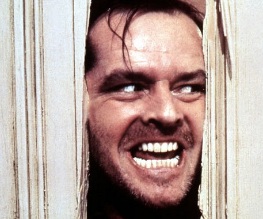 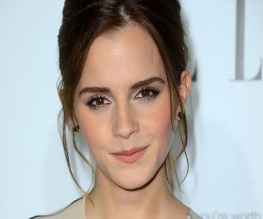