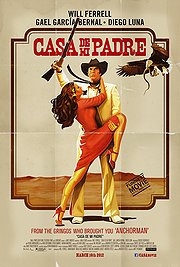 We’ve been waiting to see Casa de mi Padre, the meta-Mexploitation action comedy touted as “the funniest film you’ll ever read” for a long time – after all, a mainstream Hollywood star like Will Ferrell doesn’t decide to make a Spanish-language cowboy film every day of the week (let alone with assistance from Diego Luna and Gael García Bernal). Take a second to read that last bit back, and you already know everything you need to about Casa de mi Padre. It’s ridiculous, self-indulgent and absolutely enormous fun. ¡Arriba! Far from the drug-ravaged slums of Mexico City, the gentle ranchero Armando Alvarez (Ferrell) lives a happy life caring for his family’s cattle and dreaming of the wild, nature-loving woman who will one day share his bedroll under the stars – his father (Pedro Armendáriz Jr.) may not appreciate his simple goodwill, but Armando is content nonetheless. But when the prodigal son Raul (Luna), returns from the big city his brother is forgotten – Raul is handsome, successful and newly engaged to the beautiful Sonia (Rodríguez), and Armando cannot compete.

A certain frisson passes between Sonia and her prospective brother-in-law, and when taking her on a tour of the family estates Armando finds himself pouring out his heart to this beautiful stranger. But things turn sour when they come across a dying man lying behind a burning car full of drugs – Armando refuses to show mercy to what he assumes is a hated drug dealer, and an outraged Sonia reveals that his ‘businessman’ brother may have blood on his hands as well as gaudy rings. Is Raul really a narcotraficante? Could this have something to do with the man that Armando saw getting shot by a bloke in a pimp suit (Bernal) earlier today? And how long are we going to have to wait for a spectacular shoot-out? Whoa there, the hombres haven’t even sung a song around a campfire yet… Here’s the thing: if Will Ferrell wasn’t in Casa de mi Padre to let us know it’s a comedy, it would be utterly fucking awful. This isn’t to say that he makes the film, because he doesn’t; the heightened reality of seeing one of Hollywood’s most bankable stars cavorting around a Mexico filled with badly faked horses and outrageously OTT blood splatters simply justifies the fact that Matt Piedmont has basically made a brand new 70s B-movie. Everything is a heightened, peyote-crazed interpretation of classic Hispanic telenovelas – the plot is a nonsensical string of shocking reveals, lusty glances and pistol-heavy stand-offs, the script is soaked in melodrama, the cuts are erratic and tattered, the long distance shots are occasionally constructed using cardboard houses and Dinky cars and there’s a recurring cameo from what is quite clearly a stuffed cat. Which talks.

If Casa de mi Padre had been hanging around for forty years it’d be comfortably in so-bad-it’s-good territory, but this gleeful collaboration between so many talented actors wilfully working on a dreadful film lifts it straight into guiltless hilarity. Diego Luna is clearly having the time of his life as the sort of greaseball he could never get away with playing normally, keeping hold of his drink even as he’s surrounded by a hail of bullets, and Gael Garcia Bernal is delicious as La Onza, the sinister smuggling kingpin who smokes two CANADIAN SLIMS OMFG OLD SCHOOL PRODUCT PLACEMENT at the same time. Génesis Rodríguez has the chance to do more than get her tits out (cf. Man on a Ledge) and doesn’t do a bad job of being passionate and troublesome, which is what young Mexican women are for, and veteran actor Pedro Armendáriz, Jr. just shouts and bloody shouts all the time. To his eternal credit, Ferrell blends perfectly into this who’s-who of Mexican talent, matching the rest of the cast glare for melodramatic glare and flourishing a shotgun like nobody’s business. His accent’s pretty much perfect, too. Even if you lack the cultural context to fully appreciate Casa de mi Padre as a satire on the much-maligned telenovela – and God knows I do – it’s impossible not to enjoy a film in which the cast are clearly having this much fun. At 85 minutes the joke (there’s only one, really: ‘look how awful this is!’) is frequently stretched thin, but for a film which should never really have made it past the fake trailer stage this is entertaining enough. Casa de mi Padre probably the best shit film you’ll see this year, and if that isn’t a compliment then I don’t know what is.

Previous: Penelope Cruz is latest A-lister to join The Counselor
Next: Lockout